Prince William and Kate Middleton have announced the royal baby name two days after he was born. Find out the name of the Prince of Cambridge and the royal history surrounding it. 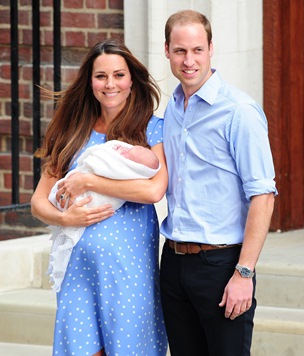 The royal baby has a name! Two days after the birth of the healthy baby boy, Kensington Palace said in a statement they are “delighted to announce” the name of Prince William and Kate Middleton’s first born son:

Baby George, who is third in line for the throne behind Prince William and Prince Charles (who is first in line) will go by the official title of His Royal Highness Prince George of Cambridge.

The meaning behind the name

Those hoping the royal couple would branch off and pick a more unique name, such as Remington, Declan or Brooks, may be disappointed, but this traditional name is steeped in royal history. There have been six British kings with the name of George, with the last being the Queen’s father, George VI.

Louis is one of William’s names and was also the name of the uncle of Prince Charles.

Perhaps the couple let Queen Elizabeth, who is Prince George’s great-grandmother, weigh in on the baby name? She met the baby for the first time this morning and spent 30 minutes with him before leaving for her annual Scotland trip.

The royal family often gives their children more than one name. Prince William’s full name is William Arthur Philip Louis and Prince Harry’s full name is Henry Charles Albert David. British royalty does not use a surname, like us regular folk.

William and Kate actually announced the baby name rather quickly, at least by royal standards! Prince William talked to the press about the name the day after he was born. “We’re still working on a name, so we’ll have that as soon as we can,“ the new dad told the waiting reporters. “It’s the first time we’ve seen him, really, so we’re having a proper chance to catch up.“

How popular is the name George?

In the U.K., the Prince’s baby names are all popular choices. The name George ranks number 12 on the most popular baby names list, while Alexander ranks at 23 and Louis is at number 68.

Even though the United States has had three presidents named George, the name is not nearly as popular for American parents. It was ranked as the 166th most popular name in 2012.

What’s next for Prince George?

After presenting Prince George to the world yesterday, the royal couple left Kensington Palace to head to Bucklebury, Berkshire to spend time in their manor house. ”This is now a private and quiet time for them to get to know their son,” a Kensington Palace spokesman told The Guardian.