Related story Exclusive: Shawn Johnson Reveals the One Thing About Parenting She Hopes to Leave Behind in 2023 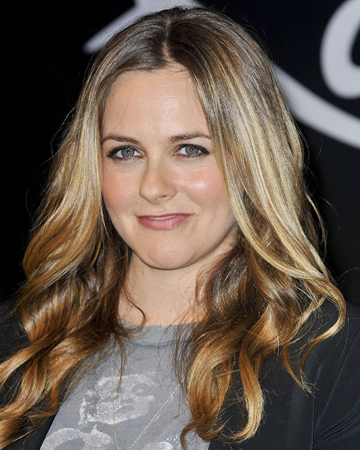 Is she right, or did they forget to edit the column before it was published?

Alicia Silverstone recently started a family-to-family milk-share program on her blog, encouraging moms who had a need of breast milk for their baby to find moms who have milk to spare. Unofficial sharing programs are nothing new, however — the Human Milk 4 Human Babies Global Network has been connecting moms in need with moms with extra milk for a few years now, and moms have been shipping their excess ounces to milk banks for even longer than that. However, Alicia’s celebrity status makes her a target, and Wendy Williams chose to not only ridicule Alicia’s efforts, but milk sharing in general, and most feel that the magazine made a major error by publishing it.

The photo of Alicia Silverstone, which rapidly went viral after being shared on the Unlatched Facebook page, accompanies a couple of sentences that equates milk sharing with slave wet nurses and the Civil War. “It’s 2013!” it exclaims. 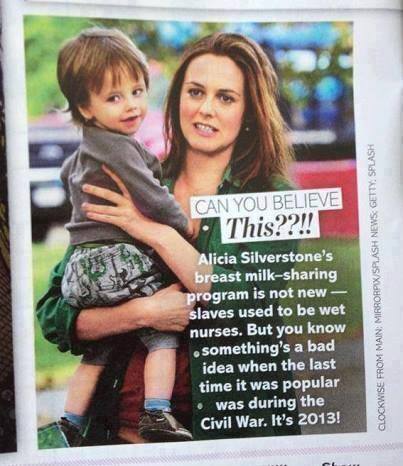 The problem with that mindset is that milk sharing is not only a valuable resource for moms who have trouble producing breast milk, but it is also a vital necessity for some babies. For example, The Human Milk Bank Association of North America coordinates breast milk donation for use by premature infants whose lives depend on it.

Jessica, the mom behind The Leaky Boob, a popular Facebook page and blog, stressed the importance of breast milk donation and was discouraged by the attitude Wendy Williams, and by default the magazine, portrayed. “Done well, done safely, breast milk donation saves lives,” she explained. “The Human Milk Bank Association of North America screens qualified donor mothers and pasteurizes the milk to feed the most fragile of infants through milk banks around North America. For susceptible infants at risk of infection, necrotizing enterocolitis, and more, donated breast milk can be lifesaving.”

Breast milk donation is, and always should be, an important option for all mothers. “I’m appalled that they allowed such ignorance to be published,” said Brittney, mother of two. “Another mom’s milk is still far superior to formula, and making good choices for your baby should not be ridiculed. The World Health Organization even recommends donor milk before formula.”

Rachelle, the owner of Unlatched, couldn’t believe the fact that Williams equated milk sharing to slavery. “I assume this was done to make Silverstone’s wonderful idea look negative, but it just shows how ignorant this author really is,” she shared. “African-American breastfeeding rates are extremely low, in part to that time in history, and comments of this nature are not supportive or positive — and are actually quite damaging to efforts to get more African-American mothers to breastfeed their children.”

The tidbit in question was written by Wendy Williams, an American media personality who hosts a syndicated radio talk show called The Wendy Williams Show. Regardless of how Wendy really feels, most believe that Life & Style Weekly made the wrong move when they printed the offending piece.

”Even though this is a quote from Wendy Williams, it was irresponsible of them to print it,” Jamie Grayson, better known as The Baby Guy, told us. “We are a society that learns and absorbs what the media presents to us — good or bad. This is an example of what happens when media doesn’t use its voice constructively.”

Jessica agreed, and felt that while Alicia is an easy target because she is in the public eye, there is another facet to the issue that should be explored. “To me the controversy here isn’t sharing breast milk or that a celebrity would want to do so, the controversy is that we have placed such an over-emphasis on the slighter sexual nature of the human female breast rather than the nutritive nature and strayed so far from our own natural response to help another human being that even suggesting donating breast milk or feeding another mother’s hungry baby could be viewed as scandalous,” she shared.

You can contact Life & Style Weekly at contactus@Lifeandstylemag.com, or take this to social media and tweet them @Life_and_style.

Breastfeeding advocates hope that this little blurb doesn’t damage the perception of milk sharing for moms who could really benefit from donated milk. This would be the worst outcome, as Jessica explained. “The real scandal is that mothers could have something that could save the lives of babies and wouldn’t share it,” she said.

The ethics of selling pumped breast milk
Breastfeeding photos: Moms with their babies
Breastfeeding in public: Why pumping or covering may not be an option

Exclusive: Shawn Johnson Reveals the One Thing About Parenting She Hopes to Leave Behind in 2023