Happy Wednesday Hump Day — also known to us as Celebrity Baby Bump Day! We have rounded up the cutest pregnant celebrities, including Glee’s Heather Morris, who showed off her baby bump while out shopping with her mom. Pregnant Jennifer Love Hewitt and her baby bump helped launch a new line of Mickey Mouse vintage tees. Fergie, Halle Berry and Jamie-Lynn Sigler round out our list of cute pregnant celebrities of the week. 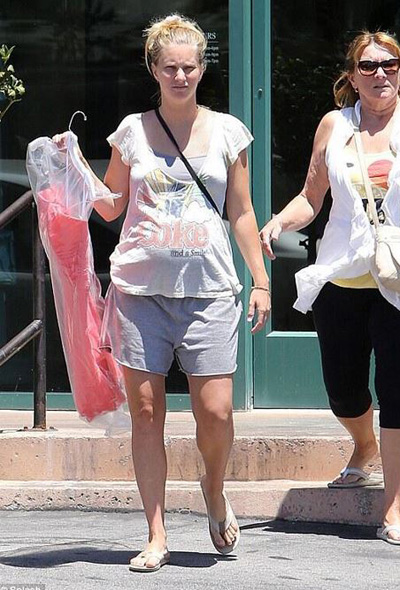 Pregnant Glee star Heather Morris, who plays the cheerleader Brittany on the hit Fox show, showed off her baby bump in a casual T-shirt and shorts as she picked up a bridesmaid dress at David’s Bridal.

Morris is expecting her first child with her boyfriend Taylor Hubbell and she is reportedly due in November.

Morris has kept a low profile since announcing her pregnancy in April, however she was recently spotted at the Beyoncé concert. Morris was actually a backup dancer for Beyoncé before starring on Glee!

”She’s so cute. She just looks adorable,” Glee‘s Naya Rivera told Perez Hilton. ”She just looks the same, except someone stuck a huge belly on her. Everywhere else, you’re like, ‘You’re not pregnant.’”

The entire Glee cast is reeling after the sudden death of Cory Monteith, who recently died from “mixed drug toxicity” of heroin and alcohol. Morris told Seventeen magazine in 2011 that she actually had a crush on Monteith. “I have a total crush on Cory [Monteith],” she revealed. “I love him. I think he’s amazing. But I love my boyfriend [Taylor Hubbell] a lot.”

Next up: Jennifer Love Hewitt shows off her baby bump in an Old Navy tee