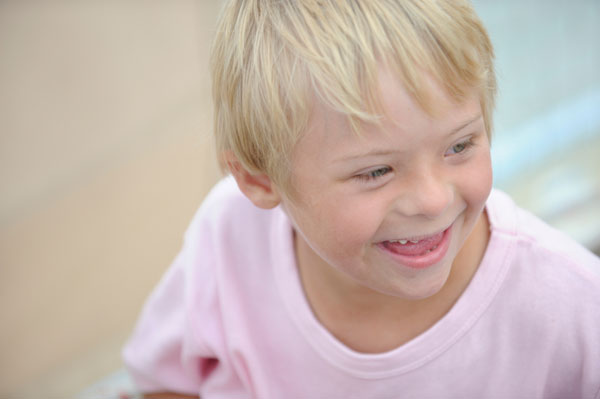 Ds to AD community: We’re in this together

Here’s why the link between Down syndrome and Alzheimer’s disease is a game-changer. “The work going on to identify drugs that would prevent the progression or development of Alzheimer’s pathology and dementia in the broader population… could be potentially applicable to Down syndrome therapy,” Harpold says excitedly.

Just as impactful? “The research [the Ds community and DSRTF] support to identify drugs and therapies to address Alzheimer’s pathology and Down syndrome could just as easily be applicable to people without Down syndrome and with Alzheimer’s,” he adds.

Learning my son has an increased risk of developing Alzheimer’s — and at a younger age — was depressing and scary, but speaking with Dr. Harpold invigorated me with hope.

“I’ve been involved more than 40 years in research, including in many areas such as Alzheimer’s disease, Parkinson’s disease, epilepsy and other neurological disorders,” Harpold says. “Frankly, over the past five to six years, I’ve not seen a field move as rapidly with as much progress as this in my entire career.”

While research and funding for research into Down syndrome is increasing, it’s still nowhere near the funding — or findings — generated by communities in search of treatments for other conditions, such as multiple sclerosis.

While Down syndrome affects approximately 250,000 Americans, research funding from the National Institutes of Health (NIH) is shockingly low compared to other conditions that affect approximately the same number of people — or even fewer.

The graphic below illustrates the disparity using Down syndrome population numbers reported by DSRTF and Research Down Syndrome (RDS). However, the Journal of Pediatrics reports approximately 250,000 people in the United States have Down syndrome. Using that figure, the estimated amount of funding per person by the NIH in 2012 was $80 per person. 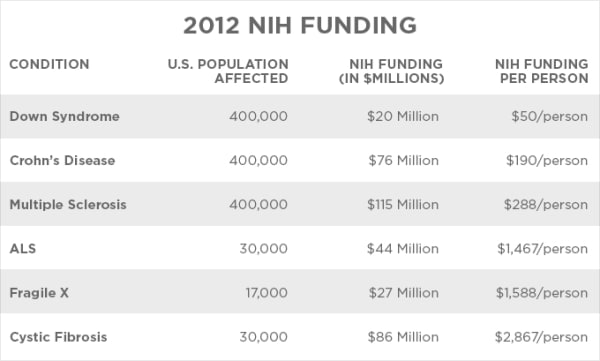 This is not a case of “my condition is more important than your condition.” This is about health-related communities having proportionate access to funding, research and treatment. Today, more than 5 million Americans have Alzheimer’s disease, a statistic that may make more people interested in Down syndrome research.

What’s holding the Ds community back?

Why is fundraising and research progress greater for health conditions that affect as many or even fewer people than Down syndrome? “The problem with Down syndrome is that it’s a triplication of an entire chromosome, so researchers are confronted with perhaps 300 to 400 genes that are triplicated,” Harpold says. “In a sense, it’s saying, ‘that’s looking for a needle in a haystack.'”

As a parent, I can attest to my lack of knowledge about the link between Ds and AD, and I admit I had little interest in learning much of the science because, well, it’s science (said the stereotypical female).

My family and I have raised money for our local Down syndrome organization for more than 3 years now, totaling nearly $20,000. I wouldn’t change a thing — our local organization depends on fundraisers to help support critical programs and services. But my eyes have been opened. I now understand the importance of research to improve my child’s future, as well as his present.

And research is under way. Harpold doesn’t withhold his enthusiasm as he describes the infrastructure that is accessible to researchers seeking clinical trials. Roche Pharmaceuticals is nearing completion of a phase 1 clinical trial and commitment to phase 2 clinical trials to test a new drug in people ages 18 to 30 years old with Down syndrome.

Rally cry to step up

Dr. Robert C. Schoen has worked with Research Down Syndrome since its inception in 2010. He also points to the disparities in NIH funding, and a lag in fundraising within the Down syndrome community, compared with other health-related fundraising organizations affecting similarly sized numbers of people as Down syndrome.

“I would encourage every parent to become aware of the tools and research done and find some way, whether with money or time, to make this an important part of your life to accept and be open to the promise of this research.”

You don’t have to be a scientist to understand our children need our help to ensure that their futures have as much possibility and opportunity as research can afford them.

An easy way to get involved is to find out about the existing organizations that support Down syndrome research: