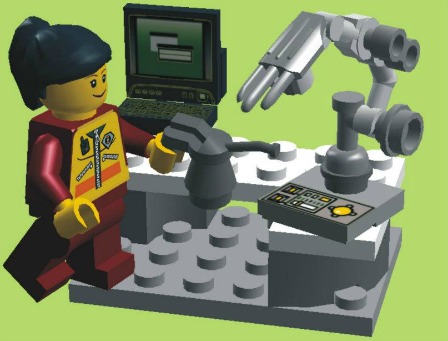 Melissa Wardy, a mother from Wisconsin, was troubled by something she and her daughter Amelia discovered as they browsed the toy aisle at their local store. Amelia was disappointed that there were no non-”pinkwashed” Lego minifigure sets to be found — and Melissa was too.

Melissa researched the issue and discovered that female minifigures only make up 16 percent of Lego’s total collection. Further investigation revealed new hope — an entry in a public Lego contest that featured “smart, adventurous and strong women in STEM jobs — such as paleontology, astronomy, chemistry and firefighting” garnered enough support for Lego to consider producing the sets. Now, Melissa has launched a wildly popular petition on Change.org encouraging Lego to actually produce the toys.

Melissa notes that having gender parity represented in the toys would help kids develop balanced attitudes towards both sexes, and that Lego has the potential to really make an important addition to their lineup.

While pink and pastel toys are fine for girls, she feels that only offering toys with that theme undermines a girl’s potential. “Limiting girls to pink and gender-stereotyped toys skews their view of how they see themselves and removes the other slices of the pie,” she explained. “Why would we choose to limit our children? In real life I know far more female scientists, professors, authors and world travelers than I do princesses and ballerinas.”

The petition is approaching 13,000 signatures — digital imprints from parents who said that yes, they would love to buy these sets for their kids. What Lego chooses to do going forward isn’t known at this time, but Melissa feels that it would be huge for the company and amazing for the boys and girls who play with the toys. “Now that the Friends line is such a hit, girls are only going to want more Lego sets, so why not transition them over to some of the other lines like City, Super Heroes, and Dino?” she asked. “What better way to do this than with more female characters?”

We asked a few moms about the petition and while some felt that it wasn’t necessary because their kids interchanged heads and hair quite often, others said that doesn’t always work because the faces are really gendered. “The new minifigures are not unisex, the faces are made to look male or female,” said Lexi, mom of one. “This isn’t just yellow faces with two dots and a smiley face anymore. I’d like to see more female minifigures that aren’t stereotypical female roles. One of the recent ones was a pink-shirted woman with a chihuahua and a cellphone.”

Heather, mother of two, agrees. “I think it would be a great way to encourage girls to play with ‘boys toys’ and envision themselves in ‘men’s careers,’” she told us. “What is odd is that Denmark, Lego’s origin country, ranks much higher than the U.S. on the gender equality scale.”

It will soon be time for Lego to make a move with less than 3,000 signatures to go on the petition. Melissa hopes that the company will listen to customers and introduce more female figures to its lineups, not only for her children, but for all of the children around the country who are influenced by media — which includes children’s toys. “My daughter loves Lego, as does my son, and having female minifigures depicting adventurous roles and STEM careers reinforces what I teach them at home about what girls and women can be,” she said.