Pregnancy can do some crazy things to your body. Between the bloating, the itching, the nausea and the heartburn, having a baby can bring some unexpected experiences. One effect that you might not think much about is loose joints. 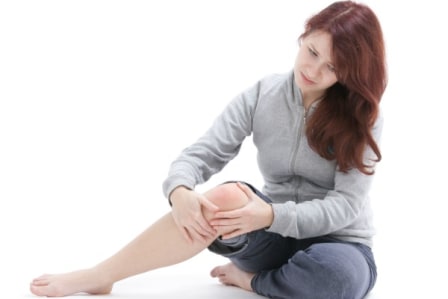 As the body prepares to push a large baby through a not-so-large space, a specific hormone works to loosen up joints. This hormone can be a godsend but it can also lead to joint laxity and maybe even permanent damage if postpartum joint health is ignored.

Soon after Jennifer Slater delivered her first child, her knee slipped out of joint twice in a matter of days. When it happened a third time, she and her newborn son fell to the ground. Traumatized by that experience, she sought the advice of an orthopedic surgeon who told her she needed knee replacement surgery. As a single parent of an infant, Slater wasn’t ready to go down that road and the problem seemed to subside… until her second baby arrived seven years later and her loose joints returned.

At the time, she recognized the suspicious timing, but couldn’t make a definitive correlation so she proceeded with the surgery. Twenty-one years later, she still remembers the recovery as worse than childbirth and wonders if her pregnancies contributed to her joint problems.

Like Slater, plenty of women experience looser than normal joints during and after pregnancy — and for good reason. Steve Alaniz, CEO of Momentum Physical Therapy & Sports Rehab in San Antonio, Texas explains that the hormone Relaxin cold be a hero and a culprit when it comes to pregnancy.

“The reason this hormone is present in higher amounts during pregnancy makes sense,” he says. “In order to squeeze the watermelon-sized baby through the pelvis, the pelvis needs to widen. Ligaments need to stretch in order to let the pelvis widen. This is all fine and is part of the miracle of life, but Relaxin is non-specific in its targeting of joints to loosen up. It takes effect on all ligaments in the body. This is why many joints feel looser both during and after pregnancy.”

Read about tips for strong bones and joints >>

Pregnancy wreaks some serious havoc on a woman’s center of gravity. Relaxin enables a woman to carry the additional weight of a baby by relaxing her joints, especially in the hips, pelvis and lumbar spine. “If guys could imagine strapping a bowling ball to their belly button, they might feel how being pregnant moves your center of mass forward and how much additional stress or load that being pregnant adds to the body,” says Alaniz. Relaxin doesn’t just disappear once Baby arrives and breastfeeding creates more of the hormone so it may take a while for joints to return to “normal” after a pregnancy.

Joint laxity can be more than just annoying, especially if ignored. “Ligaments can take up to 300 days to remodel or rebuild,” says Alaniz. “If you allow your joints to stretch without paying attention to your body during pregnancy, those changes can be permanent. While the ligament stretching is a normal response, too much stretching of ligaments can be detrimental. When ligaments are stretched too far, it can cause changes in mechanics, altered wear patterns of joints, and lead to early onset osteoarthritis. Most annoying, is the pain that accompanies the loose joints.” Armed with this knowledge, women can take proactive steps before, during and after pregnancy to prevent permanent damage.

Find out: Is it safe to have back-to-back babies? >>

Take it easy on your body if your joints feel loose. Avoid strenuous cardio or excessive stretching, which may exacerbate the problem. Alaniz provides the following tips to help women maintain joint health during pregnancy and postpartum:

We can all be thankful for Relaxin during delivery, but be aware of this hormone’s continued impact postpartum to avoid unnecessary injuries or permanent damage to joints.

13 hrs ago
by Bonnie Gibbs Vengrow