What were on the minds and twitter feeds of some of our favorite celebrity moms? New mom Kim Kardashian was photographed taking a much-needed nap, while Holly Madison shares adorable photos of her daughter Rainbow in her favorite baby swing. Busy Philipps welcomes her second daughter and hints at baby names, while Nicole Richie rounds out our list with her “Adventures in babysitting.” 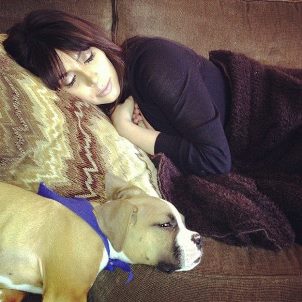 Even though Kim Kardashian and Kanye West reportedly turned down $3 million for the first pictures of baby North West, the new mom has yet to show pictures of her baby daughter. Kim K was spotted napping in this picture posted on her sister Khloe Kardashian’s Facebook page with the caption,

“I love my lil baby so much…” wrote Khloe, referring to her dog, Bernard — not her sister Kim.

The media-savvy Kim K hasn’t tweeted about baby North, but did take to Twitter to wish Khloe a happy birthday — and promote the new episode of Keeping Up with the Kardashians, of course.

Now- @khloekardashian The most loyal & supportive person on the planet! Life wouldn’t be the same… http://t.co/E01ItbFGpC
— Kim Kardashian (@KimKardashian) June 27, 2013

Khloe did tweet the following message after North’s birth, following it up with, “More info will come when the time is right! Thank you all for understanding! We love you all dearly! Overwhelmed with love right now.”

I can not even begin 2describe the miracle that is now apart of our family. Mommy/baby are healthy &resting. We appreciate all of the love.
— KhloéKardashianOdom (@KhloeKardashian) June 16, 2013

Holly Madison shared this adorable photo of her “hippie baby” Rainbow Aurora, who is 3 months old: 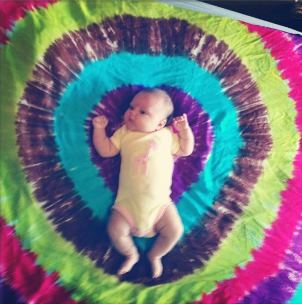 “I got engaged on Sunday! My fiancé was so wonderful in creating such a romantic night!” she wrote on her website. “He proposed to me at the top of the Ferris wheel at EDC Las Vegas. I was so happy that so many of our close friends were there to share the wonderful moment with us! We rode around the festival on the art car until the sun came up! I couldn’t have asked for a more wonderful or magical proposal!”

On her list of mommy must-haves? A baby swing!

“I love having a little swing or seat for baby Rainbow in my bathroom. This one is a MamaRoo seat that plays music, and has a little mobile for her to look at,” she wrote on her website. “She’s quite intrigued by this feature, as you can tell by the contemplative look on her face. It lets her feel comfy and close to mom while I am doing my hair and makeup or taking a shower.”

“Everyone is healthy and happy,” their rep tells People, revealing the baby weighs 8 1/2 pounds.

Busy and her husband, screenwriter Marc Silverstein, are parents to a 4-year-old daughter with the unusual name of Birdie.

No word yet on what Birdie’s little sister’s name is, but she did tell her friend, Paul F. Tompkins, that they haven’t decided on name yet.

“No name yet. We are trying out several!” she said.

Nicole Richie is one of the most hilarious celebrity moms. Here is a recent tweet that has us LOL’ing!

Shades on. Jacket off. Stick with me kid, lets go catch some tail. #AdventuresInBabysitting http://t.co/5dErESYbwG
— Nicole Richie (@nicolerichie) May 29, 2013 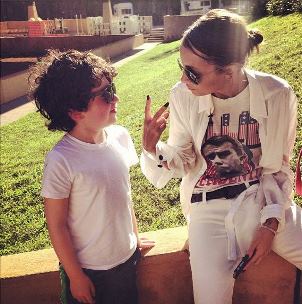