Tim J. Myers is a man of many talents. He’s an author, songwriter, professional storyteller and lecturer. What many people might not expect is that he was also a stay-at-home dad to his three now-grown children. 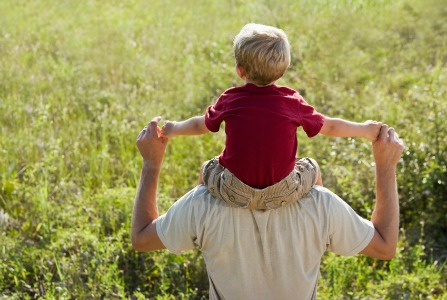 Contributed by Tim J. Myers, author of Glad to be Dad

As a stay-at-home dad, I experienced my share of stereotypical reactions. One older guy actually disparaged my manhood — but it was such a pathetic reaction I don’t even remember what he said. Of course I was called “Mr. Mom,” but I’ve forgiven Michael Keaton for that one. After all, he was manly enough to play Batman, right?

And I don’t like the idea that being a committed father means you become a slave. A true dad does have to give up a lot, at least temporarily. But if you’re willing to get organized and push yourself — like, say, getting up at 5:30 a.m. to work out, like I did — you can squeeze in some me-time.

A couple of deeper assumptions, however, are more troublesome.

I’m not a hero

The second misconception is more serious, I think. And it’s about the nature of men.

Sometimes I think some women praise domestically-involved men almost out of surprise. There are some pretty deep assumptions about males being inherently aggressive and competitive. And some go further and assume that men can’t be nurturing — that it isn’t natural for us.

I was a high-school All-American football player, and I still work out daily and play basketball whenever I can. I love rock-and-roll. I’ve never been part of a bake sale (except as a very cooperative eater). I’m a guy through and through. But loving my children, and playing with them, and reading to them, and cleaning up after them and caring for them when they were sick or sad or out of sorts — I found this to be as natural as anything else I do.

Becoming a father made me realize that the nurturing instinct had been in me all along. And I believe the vast majority of men have that same potential.

So put me in an apron and slap me on a calendar, or call me a wuss or assume I’m just a pale imitation of my wife. I’ve heard it all before, and I can deal. But don’t tell me men have no passion for nurturing. That’s just plain wrong. 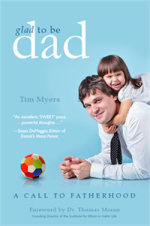 Tim J. Myers, author of Glad to be Dad, is a writer, songwriter, and professional storyteller living in Santa Clara, California, where he teaches at Santa Clara University. His resume also includes “stay-at-home-dad” to his three children, now grown. For more on Tim, visit familius.com.

Saturday in the park with autism
The new guilt: Now dad is feeling bad
Raising girls: Take a backseat to Daddy