Happy Wednesday Hump Day — also known to us as Celebrity Baby Bump Day! We have rounded up the cutest pregnant celebrities of the week, including pregnant Ivanka Trump, who looked gorgeous in an Isabella Oliver maternity dress. Pregnant Rachel Zoe was spotted out with her son Skyler, while actress Jaime King showed off her baby bump in a maxi dress. Lastly, pregnant stars Halle Berry and Autumn Reeser show off their bumps in style. 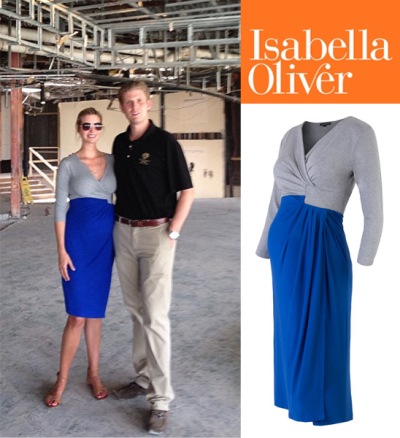 “Busy day on site,” she tweeted. “This resort is going to be incredible!”

The 31-year-old daughter of Donald Trump is expecting her second child with her husband, Jared Kushner. The couple also has a daughter, 2-year-old Arabella.

We love the name Arabella and can’t wait to hear the name for baby number two! “I have a bunch of names that we picked for baby number one that did not get used, so we have a few,” she told E! Online.

No word yet on the sex of the baby, but the entrepreneur told Mail Online, “I feel very passionate about this — I hate the title ‘working mom’ because I think every woman’s a working mom by definition,” she said.

Despite the tot’s wealthy upbringing (Grandpa Donald Trump is worth around $3.2 billion), Ivanka said she does not want to raise her kids to be spoiled brats.

“The one thing I won’t tolerate is her being spoiled or bratty or having poor manners. That’s one area [in which] I’ll be very strict,” she said.

“Arabella isn’t even 2, so she hasn’t thrown me the challenges of a teenager… but I have a feeling I’m going to be pretty strict,” she continued. “My mother [Ivana Trump] laid down pretty concrete guidelines and the concept of ‘because I said so’ was a totally viable option.”

Next up: Pregnant Rachel Zoe takes son Skyler for lunch