Jessica Simpson gave birth to a baby boy today! Get all the birth details, including the cute name perfect for her future sports star.

Related story Heidi Klum Just Doubled Down On Her Willingness to Consider Baby No. 5: ‘It Depends What Day It Is’ 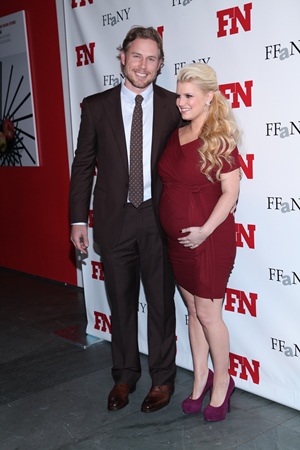 The new mom has yet to tweet about her new bundle of joy, but did a release a statement to Us Weekly.

“Ace Knute (pronounced Ka-nute) Johnson has arrived! Mom and baby are doing great,” the couple’s rep said in a statement. “Jessica, Eric and Maxwell are thrilled to welcome the new addition to their family.”

The meaning of Ace Knute

What is the meaning behind the name Ace Knute? Perhaps she gave her son the sporty baby name of Ace after daddy Eric, who played football for the San Francisco 49ers and New Orleans Saints?  “Ace” is a tennis term — however it is also used as slang for someone who is the best at their position in a team sport.

The middle name of Knute is in honor of Johnson’s Swedish grandfather, Knute Johnson.

The couple also drew inspiration from their family when naming their daughter, Maxwell Drew. Maxwell is Eric’s middle name and his grandmother’s surname, while Drew is Simpson’s mom’s maiden name.

Simpson and Johnson have been engaged since 2010, however have had to postpone their marriage plans twice because of her pregnancies — first with Maxwell and now Ace.

Simpson found out she was pregnant with Ace when Maxwell was only 7 months old. “I keep planning on getting married but I keep getting knocked up,” she joked to host Jimmy Kimmel on his show Jimmy Kimmel Live.

The couple is reportedly planning on getting married soon, as Simpson was overheard at her baby shower telling friends she planned on tying the knot a few months after the baby was born.

What other celebrities have babies named Ace?

Simpson isn’t the only celebrity to name her son this cute, one-syllable name. No Doubt’s guitarist Tom Dumont has a 4-year-old son name Ace Joseph. U.S.A. national softball team star Jennie Finch also has a son named Ace, as well as another son named Diesel and a daughter named Paisley.

What do you think of the baby name Ace Knute?

Is Kim Kardashian punking us with North West baby name?
The hottest new baby boy names of 2013
Love it or hate it: Pregnant Jessica Simpson wears a tie-dye maxi dress