When Cyndi’s uncle took her from her mother’s arms and delivered her to a new life as an adopted member of a new family, he had no idea if he would ever see her again. 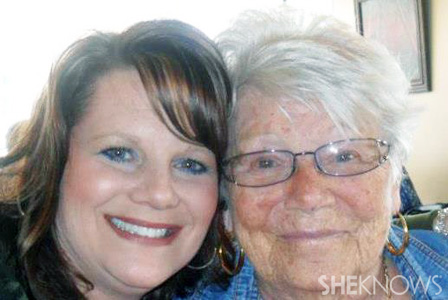 Audrey Gilligan had her reasons for giving up Cyndi for adoption, reasons she shared with her four older children and no one else. “It’s the hardest thing to ever have to do,” she says. Almost from the moment Cyndi left Audrey’s sight, Audrey never stopped looking for her.

But the story is more complex than simply launching a Facebook page. Cyndi’s search began at age 35, after giving birth to her son. She finally heard the truth from a visiting cousin, who revealed that Cyndi was adopted. “I had already known deep in my heart,” Cyndi says. “I didn’t look like anyone and I just didn’t feel a connection.”

The search was on.

Allowed only a few details

In New York state, where Cyndi was born, adopted children may request “non-identifying information” about their biological parents. Cyndi knew only a handful of factors, like the fact that her mother had four other children. Her father’s information was missing from the birth certificate. She focused her search around Olean, New York, where she was born.

What would she find?

“I really owe it all to Tracey Hall,” Cyndi says. Tracey lives in Olean, and connected with Cyndi on Facebook during Cyndi’s paper search. She first suggested Cyndi try using Facebook by setting up a page dedicated to finding her mother. 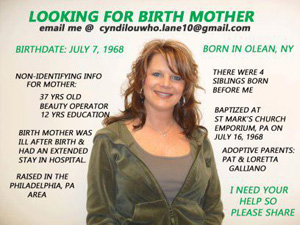 “At first I was real hesitant about doing the page,” Cyndi admits. “I was worried about people’s reaction. [I thought they’d say], ‘OK, we know you’re looking for your mom, no we don’t know who it is.'”

Her reluctance quickly turned to feeling overwhelmingly supported by more than a thousand strangers.

“Monday morning when I woke up, I was constantly on my computer. The first morning I had 83 messages [on the Facebook page], just people supporting me. People that I didn’t even know, people that I know now,” Cyndi says. “The attention on there was unbelievable. I couldn’t even get off my computer at night.”

It turned out, Tracey was the key all along, first for suggesting Facebook and then for sharing Cyndi’s page, which was shared more than 1,100 times in the first two days.

Cyndi lives in Buckstown, Pennsylvania, and it turned out that her biological mother, Audrey, lives in Bradford, New York — more than a five hour drive from each other.

“Tracey shared it on her page and her friends were from the Olean area, so it kept getting shared in their area. If I had just had my friends share it, I never would have found my mom,” Cyndi says.

At 9 p.m. on a Tuesday night, after two days of connecting with strangers, Cyndi had what she believed was her mother’s phone number in hand.

“I sat on the floor in my bedroom and my voice was shaking,” Cyndi remembers. “What do you say to someone you think is your mom? ‘Hi, Audrey, my name is Cyndi and I was adopted in Olean in 1968 and I think you might be my mother?'”

So, that’s exactly what she said. 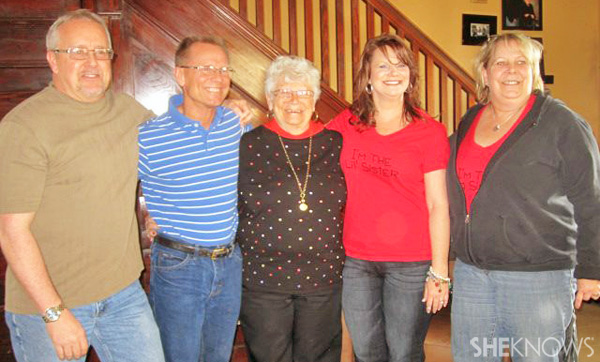 Audrey didn’t respond immediately. “I couldn’t breathe for a few minutes,” she recalls. “I had always hoped and prayed it would happen that way. When it happened, I thought gosh, I just thought about that a few days ago!”

“I thought about it every day for the last eight years,” Cyndi laughs. “You’re looking for someone, you don’t know where they are, if they’re alive, if they will accept you. I didn’t know if she would slam the phone down.”

Finally, Audrey spoke. “She said, ‘Oh dear,’ in a little voice and then got quiet again,” Cyndi remembers. The rest of the phone call “was like a dream.”

Three weeks later, mother and daughter reunited. And that uncle? The one who carried Cyndi from the hospital and wondered if he’d ever see her again? 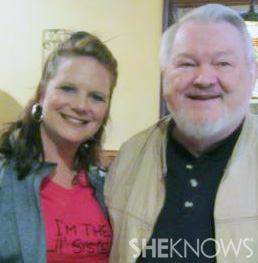 “In New York, the birth mother is supposed to carry the baby out of the hospital,” Cyndi explains. “But [since my mom] had a C-section, her brother did it.”

Nearly 45 years later, “He drove 10 hours from Michigan to meet me,” Cyndi says proudly. “We were all at a dinner together and I was giving Uncle Bud a hug and people were taking pictures and my crazy brothers said, ‘Uncle Bud, you carried Cyndi away from Audrey 40-something years ago, are you going to carry her back?'”

“It just gets better and better,” she gushes. “I love my brothers, I love my new sister.”

“She fits right in like she’s always been with us,” Audrey said. “When I would go to Olean, where she was born, I would keep looking at people. I always thought maybe she was in Olean and [I would] look at girls who would be her age… ,” Audrey shares wistfully. “I’ve been looking for you my whole life.”

With her newly discovered 29 cousins, nieces, nephews, aunts and uncles, a whole new world has opened for Cyndi. She’s determined to pay it forward by sharing her story.

“I have already told so many people,” she says. “I have been a part of so many adoption forums. [I tell people] check out my page, steal my ideas, don’t give up, do whatever you have to do.”