Happy Wednesday Hump Day — also known to us as Celebrity Baby Bump Day! We have rounded up the cutest pregnant celebrities of the week, including Jessica Simpson, who dressed her baby bump in a tie-dye maxi dress, as well as the newly pregnant Rachel Zoe. Ali Landry shows off her bare baby bump during a Palmer’s Cocoa Butter photo shoot, while pregnant Halle Berry dressed down for lunch. A very pregnant Busy Philipps, who is due any day now, rounds out our list of cute pregnant celebrities. 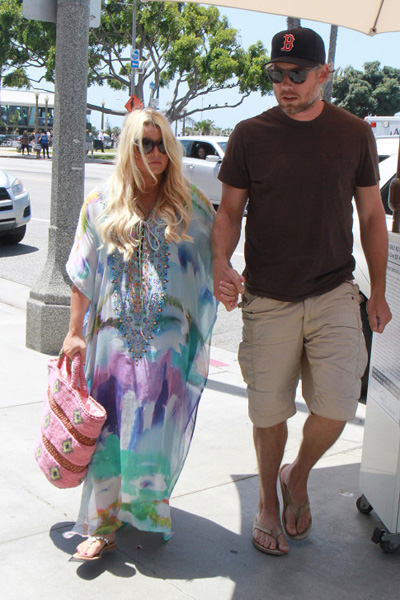 Pregnant Jessica Simpson kept her look casual and cool in a tie-dye maxi dress and jeweled sandals as she ran errands in Los Angeles with her fiancé, Eric Johnson.

Simpson, 32, is due in a few weeks with her second child — who she revealed will be a baby boy. The couple has a 1-year-old daughter, Maxwell.

It sounds like Simpson is finally ready to tie the knot with Johnson, whom she has been engaged to since 2010.

”We’ve had two different wedding dates, but he keeps knocking me up,” she told Jay Leno. ”I’ll just keep my legs crossed this time.”

Simpson, who is also a Weight Watchers spokesperson, said she has not been giving into her pregnancy cravings as much with this pregnancy.

Next up: Rachel Zoe is pregnant again! Can you spot her baby bump?