We have all seen people who seem to just understand math as if it were a second language. For many children who struggle with math, it is anything but easy. 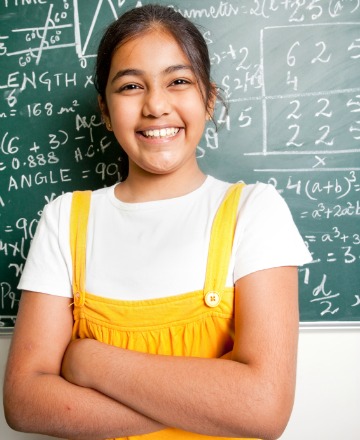 Researchers studied the brain and how it affects math learning — and how that knowledge might help all kids succeed.

It’s the four-letter word that divides a room faster than you can say “quadratic equation” — math. Love it or hate it, you can’t get away from the fact that math is the foundation for everything from baking to building. And while it affects nearly every facet of our lives, for some people learning math is a difficult task. Can you truly be wired for math success? A new study sheds light on the secrets of math learning.

What you should know about accelerated math programs >>

For years researchers have studied regions of the adult brain that relate to learning math. But the same data was not available for younger people. Kaustubh Supekar is a brain scientist at Stanford University who decided to study children to see if there are particular parts of a child’s brain that correlate more to math learning. In a study involving 24 third-grade students, he and his coworkers measured brain structures and how they are connected in order to predict a student’s math ability. They found that these structures were not only a good predictor of math ability, but they might even be a more accurate indicator than IQ or aptitude tests.

How did they measure math ability?

The team of researchers started by measuring the IQ of each third grader and assessing their individual math and reading abilities. They then took an MRI scan of their brains to measure the sizes of different regions in the students’ brains, and to see connections between different parts of the brain as well.

For the long-term part of the study, each student received between 15 and 20 hours of math tutoring over an eight-week period. After this phase of tutoring had ended, researchers re-tested the math ability of each student. All 24 children benefited from the tutoring, but the children who showed the greatest improvement in math had bigger hippocampi than the others. In addition, in the most-improved children the hippocampi were also well connected to the areas in the brain responsible for making memories and retrieving facts. These findings were considered surprising, since the hippocampus doesn’t play a big role in how an adult uses numbers. For young students, it seems to play an important role. Supekar hopes this study may help educators fine-tune math tutoring to fit how an individual student learns. “Right now, math education is like a one-size-fits-all approach,” he says.

Craig S. McCarron, Ph.D. is an assistant professor in the mathematics department at the University of the Incarnate Word. He is currently writing a book about removing obstacles to learning from math curriculum. “I am not surprised by the hippocampus results you mention, although I’m not familiar with that particular study,” he says. “We are beginning to connect the dots between learning and the physiological changes in the brain. We are still far from completely understanding these connections,” he adds.

How does this help my kid?

Do you have a child who struggles with math each school year? Here are some tips for helping your child succeed in math.