Kim Kardashian and Kanye West have settled on a directional name for their baby girl — North West! 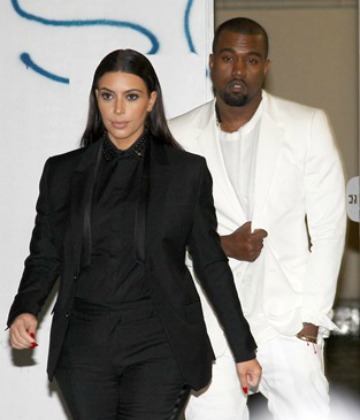 Is this name for real? Or are we getting punked by the media-savvy couple?

We finally found a celebrity baby name that has made Blue Ivy and Apple seem… well, normal. Multiple sources have confirmed that Kim Kardashian and Kanye West have named their baby girl North West. They will call her “Nori” (you know, the edible seaweed used when making sushi) for short.

North doesn’t even have a middle name, according to the copy of the birth certificate obtained by TMZ, so we can’t even hold out hope that she will be called by her middle name.

Punked by the Kardashians?

Did the couple really give their daughter this unusual name — or are we all being punked? Kim Kardashian has been uncharacteristically quiet on Twitter, with her last tweet dating June 14. The rest of the Kardashian clan has also been very careful as to what they are revealing to the media.

We do know that North was born five weeks early at 5:34 a.m. on June 15. “She has black straight hair! Lots of it! Looks like a good mix of both of them [Kanye and Kim] but more like Kim,” the source told E!. “She’s adorable! Kanye is so in love with her. He won’t leave her side.”

There were rumors during her pregnancy that Kim K was going to name her baby North, but we all thought that was cray cray and there was no way they would name her that. Kim actually appeared on The Tonight Show with Jay Leno and told him that wasn’t the name, saying she liked a different baby name.

“I do like Easton, Easton West,” she told him during the interview.

There were also those rumors that she would name her Kaidence Donda West; however, those turned out to be false.

If it is a directional baby name the couple wanted, let’s explore some other options. They could have named her West West, Weston West, Northern West or South West — like the airline. “Why call the baby ‘North West’ when ‘Wild West’ was available… and so much more appropriate!” tweeted ?@Leon_Krauze.

Even though we can still hold out hope we are being punked by the name North West, since we have the confirmation from E! (and this is the network that carries her reality show Keeping Up with the Kardashians) and TMZ has the birth certificate confirming the fact… it looks like the unfortunate baby name is legit.

On a high note, at least Kanye didn’t name her Yeezus, after his new album!

If it is instant fame the Kardashians wanted, they got it! Baby North West is already a sensation on Twitter! Here are some of the best jokes thus far:

Do you dislike the baby name North West — or do you secretly like it?