When a child’s parent is incarcerated, it can lead to questions, worry, stress and sadness. Knowing how to talk with a child in this situation is critical, but some feel that Sesame Street’s program on the subject goes too far. 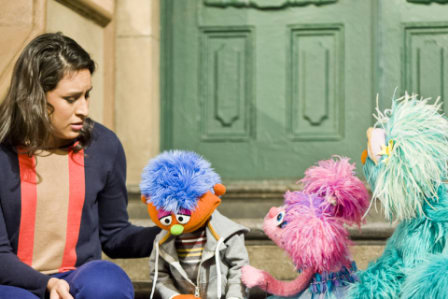 More parents than you realize are behind bars or in treatment facilities, and it can be hard to know what to say to their children when you have the chance. Do you try to make the child feel better, or is it best to validate her feelings and really listen?

Experts agree that listening is key, and even Sesame Street has gotten in on the action with a program aimed specifically towards children of incarcerated parents. What should you keep in mind when you talk with a kiddo who is missing his mom or dad, and is Sesame Street glorifying incarceration, or lending a helping hand?

Bonnie Harris, M.S.Ed., is the director of Connective Parenting and has been a parenting specialist for 25 years. She stressed that when talking with a child, it’s important to listen first.

“Do not try to cheer the child up or distract the child in any way before connecting with the emotional state of the child,” she explained. She said that trying to cheer him up may help you feel better, but it can minimize his feelings and leave him feeling worse than he was before.

Avoid asking questions, and also don’t use words that dismiss how the child feels. “Saying, ‘You must feel very sad, but don’t worry about it,’ is demeaning to the child, and the “but” erases any statement of empathy that precedes it,” Harris told us. “Questions, on the other hand, feel like a setup, and children don’t know what to answer. The question, ‘How are you doing since your mom has gone away?’ is meaningless and is making an assumption that the child can state her feelings.”

Children, especially younger ones, often have difficulty expressing how their parent’s absence makes them feel. Providing them with words they can use is validating and helps them feel understood. Harris suggests telling a child, “It must be so hard to be missing your mom or dad. It must feel like you’re never going to see him again.” She said that this is most likely what the child is feeling and, in naming the feelings, you help normalize them. “It is when children feel alone in their emotions that they think they are weird, wrong, [or] crazy and act out,” she explained.

She also recommends problem solving with the child — for example, asking if she would like to write a letter to her father, or plan a trip to see her mom when visiting hours are available. And don’t shy away from the truth or attempt to sugar coat it. “Children want the truth and do much better with it than dismissal,” she said. “Their imaginations run wild and when they hear the truth — as hard as it might be for the adult — they know what to expect.”

Sesame Street, for the first time, has a Muppet who has an incarcerated parent. Their new campaign, titled Little Children, Big Challenges: Incarceration, is aimed towards helping children ages 3 to 8 deal with an incarcerated mom or dad.

Despite their good intentions, some feel the program has the wrong goals. As a commenter on Business Insider put it, “I don’t feel it’s appropriate to make the current police state seem acceptable or normal to children though. I feel as if it’s teaching children to passively accept laws that may or may not be just, as well [as] ignoring the issues that lead an individual to commit a crime.”

However, most feel that the program definitely has a place for children affected by the absence of a parent due to incarceration. “I think it’s important for kids of incarcerated parents to not feel alone,” said Maggie, mom of one. “It’s a struggle for every member of the family. The kids shouldn’t be shamed because of their parent’s choices — this stigma obviously needs to be addressed in the country. Go Sesame Street!”

Keep the child’s feelings at the forefront when you spend time with him, and be aware that dismissing his concerns or invalidating his feelings — even a well-meaning “It will be okay!” — can add to the confusion and hurt he is already experiencing. You can’t take the hurt away, but you can let him know that his feelings are real and that you understand.

Facing the challenge of being a student parent
Same-sex parenting tips
Stepmom 911: 5 Common issues and solutions