Headed to Comic-Con this year, or another awesome geeky convention? Don’t leave your kiddos behind — there are plenty of ideas that you can incorporate into an out-of-this-world costume for your child. 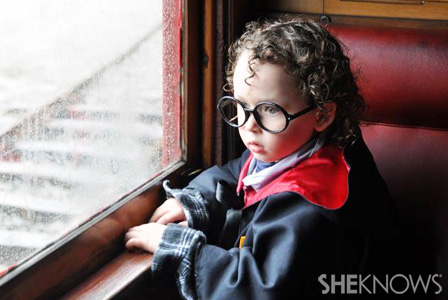 Comic-Con International: San Diego is set to begin July 18, and in addition to this world-famous event, there are scads of other conventions around the world that fans flock to in celebration of their favorite comic book, science fiction and fantasy media.

Costumes and dressing up are not required but are often a part of the fun for all attendees — babies, toddlers and kids as well as adults. Here are a few ideas to get your little one in on some fun Comic-Con action, no matter where you find yourself this summer. 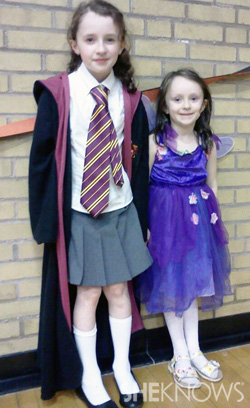 The Harry Potter universe is a popular place to draw inspiration for kid costumes. There are so many characters in the seven books, starting with the iconic Harry Potter himself.

Round glasses, striped tie, lightning bolt “scar,” messy hair and a robe is a good way to get started on channeling your child’s inner HP.

Inspiration from Harry Potter need not end with Harry himself. Your daughter can dress as Hermione — or as Shelly, mother of Lily puts it, “Lily didn’t like that people assumed she was Hermione Granger. She’s Lily, a Hogwarts student.”

You can also take inspiration from the teachers or the multitudes of creatures that abound in the stories — how cute would a baby house-elf be?

Another beloved set of characters stems from the BBC’s science fiction television series Doctor Who, which is set to celebrate its 50-year anniversary this fall. Your child can dress up as the Doctor himself — and there are 11 to choose from. Even though all incarnations of the Doctor have been male, there is no reason your daughter can’t dress up as him too.

Your child might choose to represent a companion, such as Captain Jack Harkness, River Song or Amy Pond, or even some of the doctor’s most famous adversaries, such as the Daleks or Cybermen. And don’t forget Stormageddon, Dark Lord of All for your littlest family member. 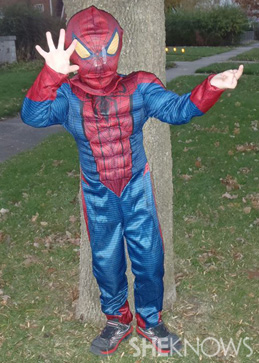 Probably one of the easiest ways to represent a favorite superhero is by checking out costumes that are typically sold around Halloween time.

Spider-man, Batman, Superman, Thor, Spawn, the Hulk — these are just a few that would be great for boys.

For girls, look for costumes that feature Wonder Woman, Catwoman, Michonne, Storm or Barbara Gordon. And there is no reason a girl can’t do a Spawn costume or a boy can’t incorporate Wonder Woman into his outfit.

So many kids are attracted to comic book characters and superheroes that you might only need to ask what their favorites are and go from there for an easy-to-do costume for your convention.

Adventure Time is a wildly popular television cartoon series that gets thumbs up from not only kids, but teens and adults as well due to funny and appealing writing. There are plenty of characters to be inspired by, such as Lumpy Space Princess, Jake the Dog, Princess Bubblegum and Finn the Human. If you’re a crafty mom, like Kimmy, you can probably whip up costumes on your own — or you can find pre-made costumes or hats. 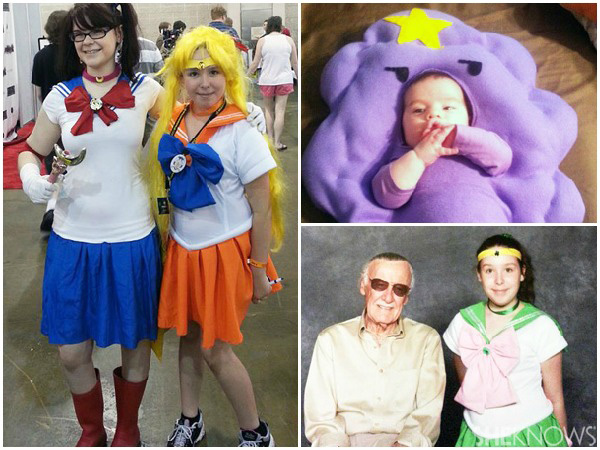 Sailor Moon is another beloved comic book character. Chrissy got her daughter a Sailor Moon costume and a wig for super cheap and has taken her to awesome events where she can talk to other Sailor Moon fanatics.

Cool geeky costumes don’t need to be expensive — with a little bit of work and imagination, you may come up with something really terrific. And best of all, you never know what can happen at a convention — you might even get your photo taken with the legendary Stan Lee!