Happy Wednesday Hump Day — also known to us as Celebrity Baby Bump Day! We have rounded up the cutest pregnant celebrities of the week, including Kim Zolciak, who is pregnant with her fifth child, showing off her bikini bod in a white bikini. Pregnant Kim Kardashian looked cute in a short flowing sundress, while pregnant Evan Rachel Wood showed off her “tomboy” maternity style. Pregnant Halle Berry and Busy Philipps round out our list of cute pregnant celebrities of the week. 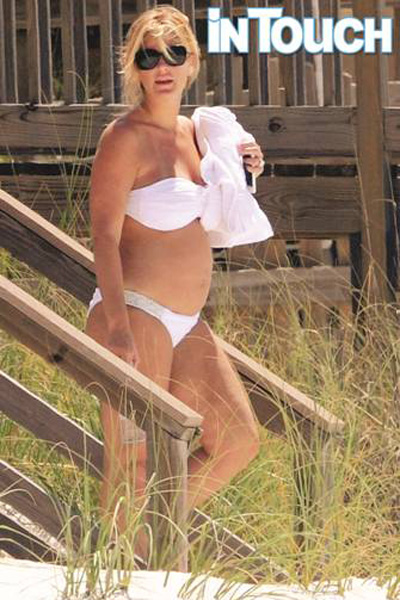 Former The Real Housewives of Atlanta star Kim Zolciak is another celebrity that is jumping on the back-to-back baby trend. She gave birth to her son, Kash, just nine months ago — and she is pregnant again with her fifth child!

Zolciak, 35, showed off her baby bump in a white bikini as she vacationed in Florida with her family on May 30. Zolciak, who is currently working on her spin-off reality show Don’t Be Tardy, was spotted on the beach with her husband, Atlanta Falcons’ Kroy Biermann. The couple also has a  2-year-old son KJ and Zolciak has two daughters (Ariana and Brielle) from previous relationships.

“Kim loves being pregnant. She really wants a little girl,” a source told Us Weekly.

The reality star has yet to talk about her pregnancy via Twitter; however she may be waiting until she is further along. “She’s been trying to keep it quiet — she didn’t realize she’s showing as much as she is,” a friend told In Touch.

Do you think Zolciak will stick with the “K” themed baby names?