So your cat is having kittens? Whether she’s having a small or large litter, you will need to be prepared. Let us help you guide her to a healthy birth experience. These tips will keep you from being blindsided by any surprises along the way. 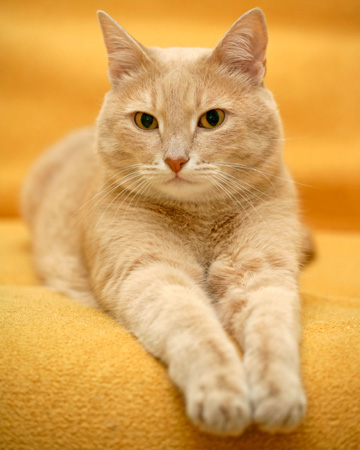 To become pregnant, a cat must be in heat — a point in her fertility cycle that lasts about four to six days, roughly every three weeks. Loud cries and growls a cat makes are often a giveaway of when she’s in heat. A cat’s very first heat can happen when she’s only 5 months old (although it is more likely at 10 months). Remember that old saying, “If you don’t want your non-spayed cat to get pregnant, don’t let her out of the house!”

Animal shelters and animal advocacy groups universally recommend spaying cats. Beyond preventing pregnancy (and not adding to feline overpopulation), spaying your cat means she’ll be less likely to develop breast cancer and will not get ovarian or uterine cancer, according to the ASPCA. Kittens can generally be spayed safely at 8 weeks of age, with 6 months of age being the latest recommended.

How to tell if she’s pregnant

It takes three weeks before visible signs of pregnancy surface. The most obvious is that her nipples will become pink. You may also notice that she’ll become more quiet and loving, with no interest in male cats. She’s likely to sleep more, and may even have morning sickness. In later weeks, you’ll notice weight gain, especially around her midsection. Ask your veterinarian to confirm the pregnancy. Total gestation time is nine weeks.

Assuming you do want your cat to have kittens, experts recommend waiting until she’s 1 year old or older. Even though cats often are physically able to become pregnant around 6 or 7 months old, their maternal instincts tend to be better developed at 1 year old or later.

Preparing for the birth

Two weeks before the birth or earlier, make a comfortable nest bed for your cat (a box filled with shredded newspaper works well). Put it in a sheltered place that your cat frequently visits. As a backup, use non-clumping litter for her box since cats sometimes give birth in the litter box. If the kittens are covered in litter, the mother may refuse to clean them off and the kittens can drown in their own fluid. For this and other unforeseen emergencies, keep information for your vet or an emergency clinic on hand to reach around the clock. Also line up definite homes for the kittens before they are born.

You may think you know which cat is the kittens’ father, but a roaming female in heat can likely mate with more than one male, allowing her litter to include kittens with different fathers. So if you think your purebred Siamese mated only with another Siamese but then gives birth to what are clearly Calico kittens, you’ll have evidence she’s been with another cat.

Note: Helping your cat usher her babies into the world can be a magical experience. Keep her well fed and healthy with regular veterinary checkups. Also be prepared to spend time with her the first few days before and after birth — and have fun naming the new kittens!

Is it safe to let your cat roam free?
The pros and cons of letting your cat roam
Top baffling cat behaviors explained