Oops… even celebrities get it wrong sometimes! We’re telling you why Rashida Jones and Adriana Lima’s fashions fell short in our weekly feature. Learn from the stars’ sartorial slip ups! 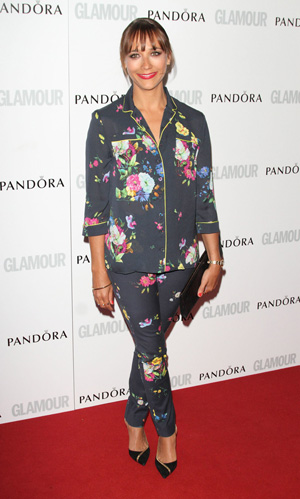 Rashida Jones must have been super jetlagged from her transatlantic flight across the pond when she got dressed for Glamour’s Women of the Year awards and just decided to wear her pajamas. Why else would the Parks and Recreation actress wear this outfit to a red carpet event?

Rashida turned up to the posh event at Berkeley Square Gardens in London rocking an outfit that looks like loungewear. Sure, the floral print is pretty and the pants are nicely fitted, but this is still totally a pajama top! This ensemble is actually made by Erdem and the runway version featured a cape to fancy it up.

Victoria Beckham was honored with Woman of the Year at the event and we can only imagine what she would have to say about this loungewear look.

The final verdict? Rashida also phoned it in with her hair that night, sporting a ponytail. Please save PJs and a pony for doing laundry on a Sunday night. While Rashida didn’t win any fashion props, she did receive the Filmmaker of the Year award, so it wasn’t a total wash. 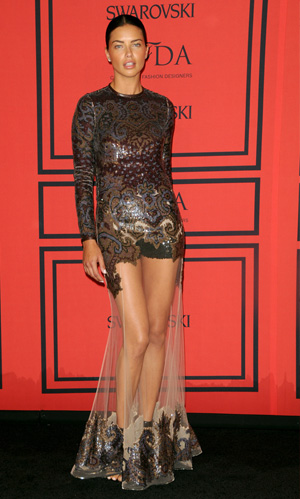 Even supermodels aren’t exempt from the occasional fashion mistake. Take Victoria’s Secret angel Adriana Lima for instance, who wore this Givenchy by Riccardo Tisci creation for the CFDA awards in NYC. It seems Adriana couldn’t decide if she wanted to be covered up and demure or show lots of skin, so she did both… but it doesn’t quite work.

The long sleeves and sequin detailing on the top are pretty, but having the sequins continue down her legs and onto the mesh bottom makes it look like something’s growing on her. The weird white mesh reminds us of mosquito nets, and the sequins all over the bottom just seem strange. Adriana has amazing legs, so why not just ditch the netting altogether and just wear shorts?

The final verdict? If she lost the bottom portion of this dress and had the sequin detailing end where her shorts’ hemline begins, we think this could be a cool, fashion-forward look. But the way this gown is styled it just looks like she’s missing parts of it.