Angelina Jolie is back in a big way! The actress supported fiancé Brad Pitt at the Berlin premiere of his movie, but all we want to talk about is her gorgeous white dress. 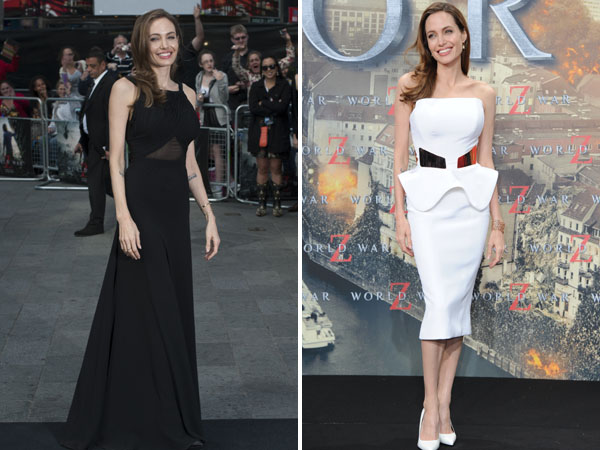 Angelina Jolie celebrated her 38th birthday in a big way in Berlin.

The actress stepped out with Brad Pitt at the German premiere of World War Z dressed in a white, structured (and drool-worthy) Ralph & Russo dress accessorized with a gold belt.

The dress is a huge departure from the black Saint Laurent gown she wore to the London premiere of the sure-to-be-blockbuster zombie movie.

The verdict? We love it! The mom of six always looks good in darker hues, but the white really plays up her features — and she looks like she’s glowing.

Not that we ever expect her to stop wearing black. The actress told Vogue that she’s really all about the monochromatic look.

“I like to get up so every pair of pants goes with every top, every dress goes with every shoe. I have a very tiny closet,” she joked in a 2010 cover interview. “Brad’s always laughing at me. Some days, yes, I have the nightgown that looks like a dress that I can sleep in and pick the kids up at school. And maybe take a meeting if I switch into heels.”

Her “wear what feels right” mantra extends to her children, too. Daughter Shiloh is a tomboy — and Jolie completely supports that.

“I don’t think it’s for the world to interpret anything,” Jolie said in 2010 of the absurd sexuality rumors swirling about her middle daughter.

“She likes to dress like a boy and wants her hair cut like a boy and she wanted to be called ‘John’ for a while. Some kids wear capes and want to be Superman and she wants to be like her brothers. It’s who she is. It’s been a surprise to us and it’s really interesting, but she’s so much more than that — she’s funny and sweet and pretty. But she does love a tie.”

Which Angelina Jolie dress do you like more? Sound off in the comments below!

32 mins ago
by Taylor Lane

56 mins ago
by Taylor Lane

1 hr ago
by Kristine Fellizar