The Hangover: Part III star Bradley Cooper stepped out in Europe wearing his hair in a questionable style. We’re not sure how to feel about this. 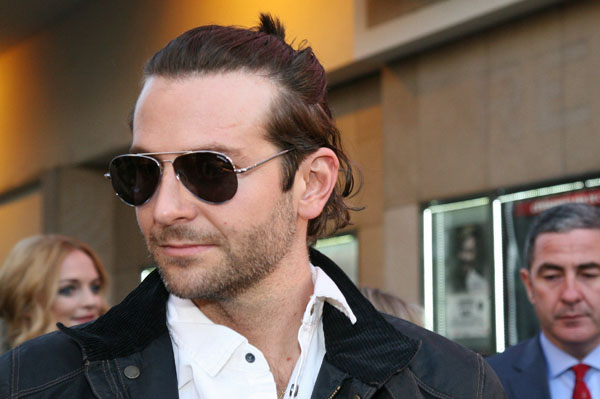 Bradley Cooper, how do we love thee? Let us count the ways: those eyes, those abs, that brain… that topknot?

It seems that actor has taken to tying his long, dark locks in a topknot during his international promo tour for The Hangover: Part III. He’s been spotted with the look in Europe and South America over the past week.

Don’t get us wrong: We love, love, love Bradley. It’s just something about that greasy ponytail that reminds us of that guy in college who hated deodorant and spent all day smoking “cigarettes.”

However, Cooper is known for going to serious length for his craft — including the perm he donned in April while filming David O. Russell’s American Hustle in Boston.

Maybe it’s because his hair brought him fame in the first place? At least that’s what Hangover director Todd Phillips thinks.

“I said to him in the early stages of filming the comedy, ‘We’re going to turn you into a leading man, but first we have to grow your hair,'” Phillips said of convincing the 38-year-old actor to grow out his locks. “Something about the long hair, it registers more pain. It’s also his extraordinary acting ability.”

We’ll admit: The hair does help his whole look — but the topknot? No, thanks. Maybe we’re just jealous that he can do a better topknot that we can? That’s probably it.

Do you like Bradley Cooper’s hair pulled back, or should he cut it shorter? Sound off in the comments below!