Khloe Kardashian is making herself over! The reality star just debuted her new Invisalign braces. 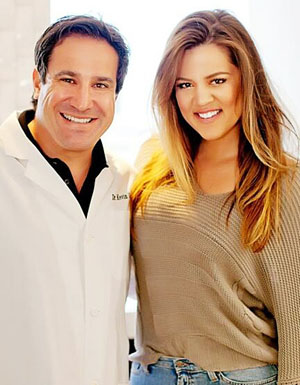 Khloé Kardashian is trying to go straight — straight with her teeth, that is! The Keeping Up with the Kardashians star just got braces.

“Thank you @drkevinsands for being the best dentist ever! If only we could all be put to sleep like Lamar LOL maybe next time :),” she tweeted on May 9.

So, what’s the deal? It’s not really that unusual: The reality star opted to get Invisalign to straighten out her pearly whites.

“Invisalign is a great way to straighten and perfect teeth without being too noticeable,” Dr. Sands told E! News.

The popular procedure involves using clear trays to straighten teeth instead of the traditional metal braces. Patients get fitted for a tray at their dentist’s office and wear it for two weeks before going back for another one. Rinse and repeat until teeth are straight.

Kardashian isn’t the only one to go clear. Celebs like Katherine Heigl and Justin Bieber have opted for Invisalign.

As for Kardashian? Invisalign is just the next step in her “makeover.” The reality star has been busy revamping her body over the past several months with a strenuous workout routine and healthy diet.

“I probably thought I was prettier before I entered the spotlight because being compared to somebody else every day does sort of beat up your spirit and soul,” she told Cosmopolitan U.K. of her body image struggles.

But she’s getting healthy for herself, not for anyone else.

“I don’t care what size I am; I care about how I look,” Kardashian said. “If my jeans are tight and I have a little muffin top, then OK, I have to cut down on the carbs. I don’t expect to be a size two and nor do I want to be. I’m 5-foot 10-inches and I like being curvy.”

Do you use Invisalign to straighten your teeth? Tell us about your experience in the comments below!