Oops… even celebrities get it wrong sometimes! We’re telling you why Kim Kardashian and Madonna’s Met Gala fashions fell short in our weekly feature. Learn from the stars’ sartorial slip ups! 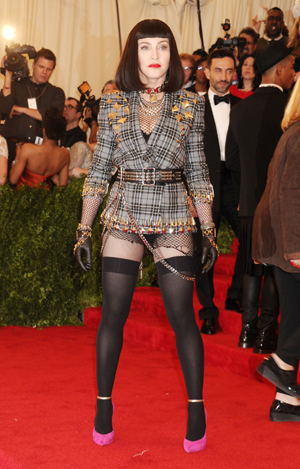 Apparently the definition of punk to Madonna is wearing plaid… and not wearing pants! The “Material Girl” singer stepped out for the Met Gala in NYC wearing a wild ensemble to pay tribute to this year’s Punk: Chaos to Couture theme.

Leave it to 54-year-old Madge to be the celebrity showing the most skin on the star-studded carpet. She wore a fishnet body stocking and a plaid, studded blazer by Givenchy, which also featured chains and a giant cross dangling from her butt.

The blazer itself is OK and we like how she accentuated her waist by adding a belt, but we wish she would have added some pants or shorts, too! The leggings-dress combo was a huge trend at the Gala and was seen on fashionistas from Jessica Biel to Nina Dobrev. Adding a pair of leather leggings would have completed her outfit nicely.

The final verdict? Madonna’s never afraid to take a risk, so we applaud her for that, but when even all the young starlets are covering up, maybe you should take a cue from their book. We do like her hot pink heels! 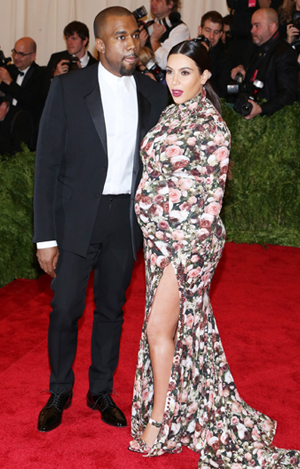 We feel for you, Kim Kardashian. It’s not easy trying to dress punk while pregnant, but what were you thinking when you donned a head to fingertip floral print dress? Kim chose a custom Givenchy by Riccardo Tisco gown that would be tough for almost anyone to pull off.

Large prints aren’t always very slimming and when you’re seven months pregnant like she is, we’d advise her to pick a solid color instead to streamline her figure. Then there’s the matching floral gloves she added, which create the illusion that she has no hands at all. Creepy!

Finally, the Keeping Up With the Kardashians star finished her floral fail with a pair of strappy sandals in the exact same print. This is so unnecessarily matchy matchy! We thought she looked stunning in the black silk Prada dress she wore to meet Anna Wintour earlier this week. When in doubt, black is always a good bet.

The final verdict? Let’s look on the bright side: at least she got to go to the Met Gala this year (even if she was dressed like a couch)! She was banned last year but allowed to attend this year since Kanye was performing. Oh, and he dedicated a song to her at the event about how awesome she is. So at least there’s that!