Oops… even celebrities get it wrong sometimes! We’re telling you why Jennifer Aniston and Patricia Arquette’s fashions fell short in our weekly feature. Learn from the stars’ sartorial slip ups! 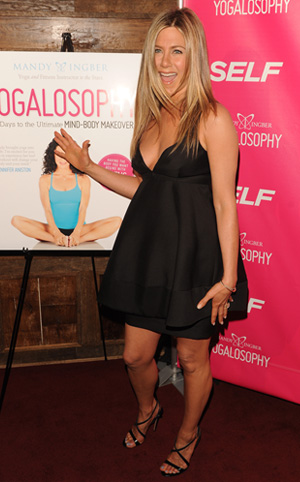 Jennifer Aniston just can’t get enough LBDs! The actress chose yet another little black dress as she hosted a party for her yoga instructor Mandy Ingber’s new book Yogalosophy: 28 Days to the Ultimate Mind-Body Makeover. There’s no denying Jen’s body looks better than ever, but this dress doesn’t do her any favors.

Besides the fact that we’re tired of constantly seeing her in black dresses, the babydoll cut of this one does nothing to show off her flawless figure. What’s the point of doing all that yoga and then covering up with an empire waist, Jen?

And for a woman who’s constantly put on tabloid covers claiming she’s expecting, this dress is one surefire way to guarantee they’ll begin the bump watch yet again. We’d love to see Jen in something fitted and colorful next time.

The final verdict? This little blah dress aside, 44-year-old Jen looks gorgeous — from her casual hair and beachy glow to those killer, tanned legs and cleavage. You’re forgiven! 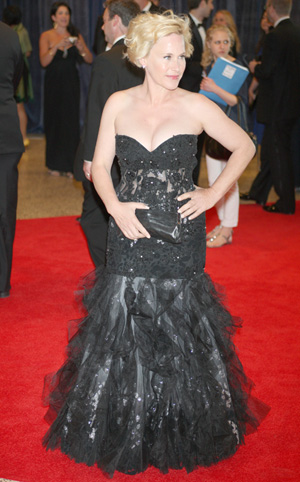 They say Washington is like Hollywood for ugly people, but last weekend, Hollywood stars descended on Capitol Hill for the annual White House Correspondents’ Dinner and some of their fashions were rather ugly. Take Patricia Arquette, for instance.

The Medium actress chose a cleavage-baring black strapless gown to attend the glitzy event. We don’t mind the lace cutout midriff, but what the fug is happening at the bottom of the dress? Did an intern think her dress was actually a classified document and start putting it through a paper shredder? The dress, with tulle pieces hanging off combined with the floral print underneath, is getting a veto from us.

There’s simply too much going on with this dress, so we hope Obama gave her a presidential pardon for her fashion mishap and first lady Michelle shared the name of her stylist with poor Patricia.

The final verdict? More isn’t always more. In addition to the mismatch of prints and fabrics, Patricia’s hair looks severe. Strapless can be tough to pull off if you have super short hair. Next time, she should try a one shoulder gown in a simpler print.