Move over, side boob: Gwyneth Paltrow is trying to bring in the side butt look. We’re not convinced this needs to be a trend. 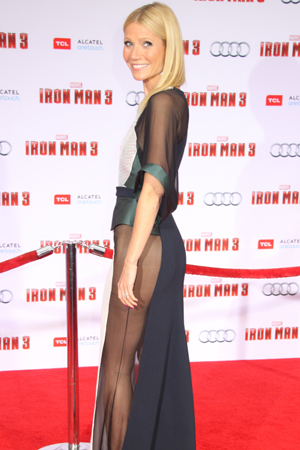 Gwyneth Paltrow: You were just named People‘s “Most Beautiful Woman in the World” — how are you going to celebrate? Apparently, by going commando in an Antonio Berardi creation for Wednesday night’s Iron Man 3 premiere in Los Angeles.

“It’s very see-through,” the mom of Apple and Moses admitted to E! News. “I just thought it was really beautiful and it sort of has a superhero thing happening.”

That it does. The dress — complete with sheer side panels — definitely draws our eyes directly to Paltrow’s trim-and-taut behind. She obviously looks amazing — thanks to her strict regimen of Tracy Anderson–approved workouts — but can the average woman pull it off?

With some confidence, absolutely!

And it’s obvious that Paltrow does have that confidence, even if she’s not willing to admit it. The actress told the Associated Press that she doesn’t deserve the title of “Most Beautiful.”

Gwyneth says Botox made her look like Joan Rivers >>

“It’s funny, these things, because it’s like obviously not true. But it’s very sweet to be named that,” she told the AP. “Because I mean you can’t say that, you know! But it’s been wonderful. It’s been very wonderful. And as my friend said, it’s so nice that someone who has kids and is a mom and is not like 21 is named that. It’s really an honor.”

Own it, Gwynnie! You look amazing.

Do you think Gwyneth Paltrow–style side butt should become a thing? Sound off in the comments below!