Cinco de Mayo is just a few weeks away — let’s take a look at the hottest festivals to attend in the U.S. this year! 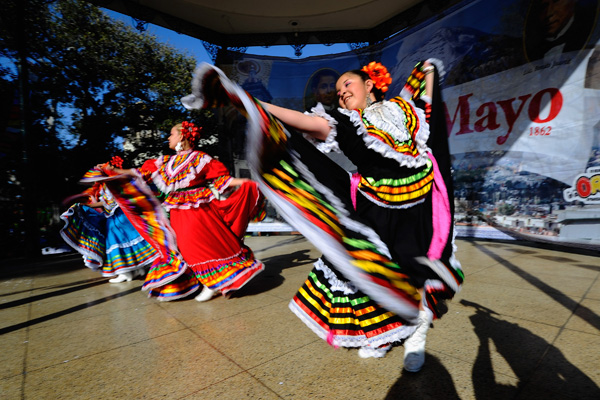 Cinco de Mayo means May 5th in Spanish, and is therefore celebrated every May 5th in both Mexico and the United States. Many Americans believe that Cinco de Mayo is Mexico’s Independence Day, but that’s not the case. That day is actually celebrated on September 16th and Cinco de Mayo is a celebration of the Mexican army’s victory over France in 1862. So what do we do to celebrate this victory? Have a fiesta, of course! Check out the five best Cinco de Mayo festivals and parades to attend this year — and don’t forget your sombrero!

Fiesta Broadway kicks off the celebration early by taking place on April 28th, 2013. Held in Los Angeles, the festival takes over 20 blocks and fills them with Mexican food, craft exhibits, entertainment and more. Typically, the festival draws in over half a million people, so come early. Plan on staying for dinner or checking out one of Los Angeles’ authentic Mexican restaurants — certain to have their own parties going on, too!

Arizona goes all-out when it comes to Cinco de Mayo celebrations. Festivals take place in downtown Phoenix at Patriots Square Park and in neighboring cities such as Chandler, Scottsdale and Mesa. All of the festivals feature food, fun and entertainment — including dance competitions in Mesa and dog races in Chandler. Since Arizona’s so close to the border, they take the holiday seriously, and we love it!

We know Chicago takes festivals and holidays very seriously (think dyeing the Chicago River green for St. Patrick’s Day), so we don’t doubt their ability to put on an awesome Cinco de Mayo party. Chicago’s fiesta lasts three days and is full of parades, mariachi music and dancing. Let’s also not forget Chicago’s wide array of Mexican restaurants, most of which offer deals and have little parties of their own.

Chicago made the list of the five best St. Patrick’s Day parades, too >>

Head north for Portland’s Cinco de Mayo celebration at Waterfront Park. Approaching its 30th anniversary, this festival draws nearly 300,000 people each year. Expect to go on carnival rides, see fireworks, be entertained with music and dancing, and buy unique Guadalajara jewelry — all while sipping on margaritas and indulging in Mexican street food.

Who would have thought Minnesota would be big on celebrating Cinco de Mayo? Not us — but we’re pleased that they do! Minnesota offers two days of parades and festivals spread throughout the District del Sol. Home of salsa-tasting competitions, live music, craft shows, car shows and plenty of Mexican cuisine, this festival isn’t one to be missed.