There’s a Texas ton of great vacation destinations in the Lone Star state, but the Dallas area is a foodie’s paradise. We’ve got the lowdown on the best restaurants within 1,000 miles of Cowboys Stadium. 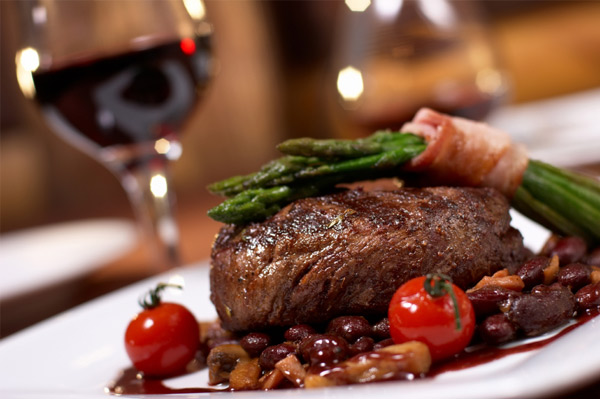 There’s a Texas ton of great vacation destinations in the Lone Star state, but the Dallas area is a foodie’s paradise. We’ve got the lowdown on the best restaurants within 1,000 miles of Cowboys Stadium.

Ready to eat? So are we. Good thing the DFW area isn’t short on fantastic food! You can diet when you get home. For now, just enjoy the taste of Big D.

It’s only appropriate that we start with breakfast. Bread Winners is almost always named by locals as the best breakfast in the city, and for good reason. And in the spirit of “when in Rome,” we recommend the fried chicken and waffles with cream gravy, Henry’s Hot Sauce and maple syrup. Yeah, it’s $15 a pop, but there’s a reason for that!

Marshmallow soup. Need we say more? This cozy French restaurant is considered by many locals to be the place to take out-of-town guests. Their savory soufflés are the stuff your dreams should be: light, airy and delicious. But this isn’t the place to stop in for a quick meal. The folks at rise believe in fresh, slow-cooked food, so it could take some time to get your meal.

The first restaurant in Dallas’ illustrious Trinity Design District, The Meddlesome Moth serves some delicious food, but the real draw here is the beer selection. They have 40 draft beers and over 85 bottled brews, so you’re sure to find something you’ve never tried before. Pop in for a quick beer after a long afternoon of walking the district. But be forewarned. You won’t find any of the Big Three beers here. They carry only the finest craft and high-end beers.

If you’re in the mood for some Asian-inspired goodness, check out local favorite b.b. bop Rice Bowls. The entire menu is a list of create-your-own options with a few signature dishes thrown in for those who just can’t decide. Inexpensively priced, the options are as healthy (and vegetarian-friendly) as they are delicious. Just don’t go expecting authentic Korean food. Though many in the local Korean population give it high marks for flavor, authentic it is not — no one seems to mind, though.

Confession: There’s not really any excellent barbecue in Dallas. That’s not just us talking, either. D Magazine, the Dallas foodie go-to mag, agrees. That being said, it’s a good thing Dallas is just one small part of the DFW metroplex. We disagree with the mag about which barbecue spot is No. 1, though.

Just half an hour away in Red Oak, you’ll find Randy’s Bar-B-Que. The locals love Randy’s because it stays true to the roots of Texas barbecue. You don’t need sauce, it’s served up by the pound in the original style (on paper, not china), and the ribs just fall off the bone. Get the brisket with a side of mustard- and pickle-filled potato salad… the only way to eat it in Texas!

You can’t mention food in Texas without finding the best steakhouses. While Del Frisco’s is more well-known, Pappas Bros. is the best according to both the locals and our magazine of choice, D Magazine.

The food at El Fenix is good, but no one really goes there for that. El Fenix is famous in the DFW area for its glorious Texas-style margaritas. Made with only the finest liquors, the Martinez Margarita is pricey at $8, but you’ve never had one that tastes better.

They’ve served a host of celebs and even a few Dallas Cowboys, but more importantly, Mia’s Tex-Mex Restaurant has been serving the locals in the DFW metroplex for over 30 years. This family-owned restaurant does things the way we’re used to in the Lone Star State — with original family recipes and a giant menu filled with all our favorites, served up with love by Mama Mia herself.

Lest you think Texas food is all about steak, barbecue and Tex-Mex, before you leave Dallas, make sure you stop by Tei-An, a gourmet Japanese soba house. If you’re not a fan of soba, they also have ramen, pressed sushi and more. But the one thing you can’t leave without trying is the soba ice cream!

Probably the best way to enjoy local favorites in Dallas is to ask Big D natives what local eateries they frequent. In DFW, we love to eat, so you’re sure to get an earful!

More on vacationing in Texas

31 mins ago
by Taylor Jeffries