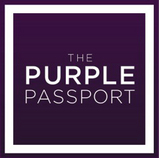 In Manhattan, sushi isn’t just a type of cuisine, it’s practically a food group. The Japanese raw-fish fix has become a staple for everyone from hedge fund managers to prep-school kids, all whom support a crowded field of sushi eateries. 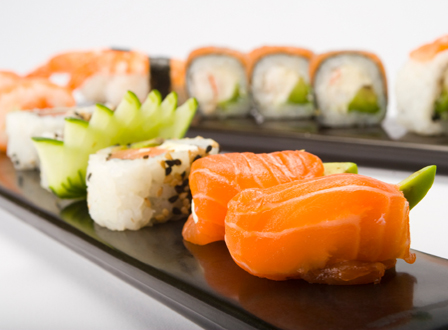 With so many sushi restaurants crammed into one small island, it’s definitely a case of too many fish in the sea. How to choose?

We’ve cut out the guess work and rounded up Manhattan’s cream-of-the-crop sushi spots: 10 places where you can count on the fish being just-caught fresh with chefs highly skilled in their art.

If you’re looking for a romantic, date-night spot, this low-lit, wood-canopied sushi house is a stellar pick. There’s fantastically fresh fish (from three oceans: the Pacific, the Atlantic, and the Sea of Japan), an extensive sake selection, and — perhaps best of all — late hours (the kitchen closes at 2 a.m.), perfect for extending the evening with that special someone.

All eyes are on the fish at this veritable “sushi theater,” where virtually every seat in the house has a view of the minimalist wood bar where the chefs work their magic. Head chef Masatoshi Sugio’s innovative omakases are legendary, and the sleek, modern vibe is refreshing to find in this corner of Manhattan. 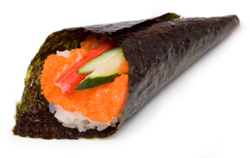 The name of this downtown sushi destination means “jewel box” in Japanese, and the delicate sushi bites served are truly gems. The sushi bar seats a mere six, lending the feeling that you are being served by a private chef, though you’ll be quite well attended at any of the small, candlelit tables, too (the owners are known to pop over with artisan sake recommendations).

If you’re looking to splurge, join the Japanese power suits at this pricey but absolutely divine sushi den tucked away on the second floor of a nondescript Midtown office building. To find fresher fish, you’d have to hop a plane to Japan and catch it yourself. Toshihiro Uezu’s exquisite preparations more than do it justice.

This swank Japanese-Peruvian fusion restaurant is the flagship of chef Nobu Matsuhisa’s worldwide empire. Since its opening in 1994, Nobu hasn’t really made any significant changes to the menu, yet it still attracts the same well-heeled crowds with its classic preparations (yellowtail sashimi with jalapeño, anyone?), consistent execution and infectious energy. 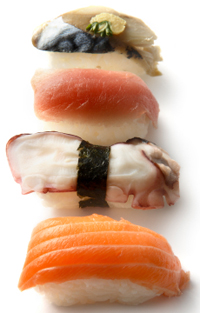 Consider yourself warned: This petite sushi shrine, the New York outpost of the beloved Los Angeles resto, revolves around the strict orders of head chef Kenji Takahashi. He doesn’t allow soy sauce, won’t serve California rolls or spicy tuna rolls and makes ordering omakase compulsory, but it’s worth bending to his purist whims for a bite of his luscious fare.

Attention to detail practically runs in the veins of Sotohiro Kosugi, a third-generation sushi chef who’s often seen pacing behind this zen venue’s long, blond-wood sushi bar, correcting and perfecting every dish. Luckily, the stark white surrounds don’t distract in the slightest from the unparalleled flavor and painstaking presentation on the plate.

Tucked beneath the Greenwich Grill, this subterranean sushi “speakeasy” offers a truly insider New York experience. Savvy locals duck in for the celebrated omakase and only-in-Japan touches like the house-made soy sauce and special blend of sushi rice. The lucky few get seats at the tiny bar, while groups covet one of the three enormous circular booths. 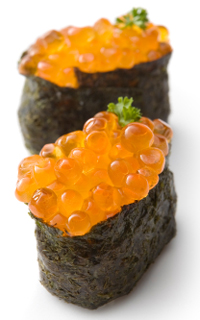 The assortment of seafood picks at this under-the-radar sushi spot — many of them hard-to-find Japanese varieties — satisfy the most rarefied of sushi snobs, yet you’d be hard-pressed to find sushi of this quality in Manhattan at better prices. The unpretentious atmosphere and great mix of village folk add to the appeal.

Drama abounds in this chic Japanese restaurant, and not only because the Iron Chef himself — Masaharu Morimoto — is the man behind the magic. Once you make your way past the huge curtains and into the modern two-story space, expect to be wowed by an installation of 17,000 illuminated water bottles and plates that dazzle with color, flavor and presentation.