Driving at night is a whole different ball game than driving during the day. Your depth perception is off, you’ve got headlights glaring in your eyes and you’re probably not as well rested as you should be. There are a few things you can do, though, to help keep yourself safe after the sun goes down. 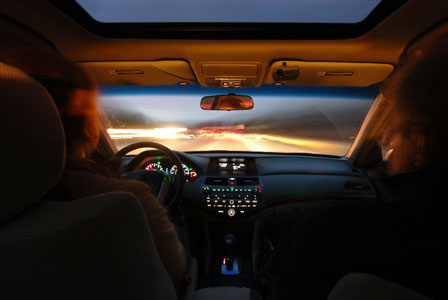 It may seem contrary to common sense, but many people forget to turn on their headlights. Forgetting to do that puts you in danger in more ways than one — you can’t see what you need to, and people can’t see you. So, make sure to double-check that your lights are on.

Subaru of America racer and film producer Ali Afshar says forgetting to turn on the headlights is a mistake that’s even easier to make inside city limits.

“In big cities, the streets are usually bright, and you can sometimes forget to turn your car headlights on since the outside is so well lit,” he says. “Make sure to double-check your headlights, even in newer cars that have automatic lights.”

Since your visibility is limited at night, it’s going to take you longer to react than it would during the day. Allow for that by giving yourself some extra space.

“Give yourself more distance between your car and the car in front of you than usual,” says Afshar.

Even if you’ve got tons of space between you and the car in front of you, you need to be more aware of what’s coming down the road.

“Scan further down the street and always check your surroundings,” he adds.

Even with your headlights on and your eyes fixed on the road, you just don’t see as much at night as you do during the day. For that reason, Afshar warns you to slow down at night.

“Potholes and other objects are always a bit more difficult to see at night,” he says.

Going slower ups the odds that you’ll miss whatever’s in your path, and if you don’t, it may do less damage if you hit it at a slower speed.

Streaks on your windshield and mirrors may seem hardly noticeable during the day, but they can be nearly blinding at night. When headlights from other cars hit the streaks, they cause glare that makes it hard to see the road. To avoid this, keep your windshield and mirrors as clean as possible and wipe them with a newspaper when you’re finished driving to remove any leftover residue.

If you’re hitting the roads after dark, it’s probably getting close to your bedtime. It’s never a good idea to drive while you’re sleepy, but it’s especially dangerous at night.

“Being rested is very important,” says Afshar. “If you’re tired, the dark and the light from other cars and signs can wear you out. Make sure to always pay attention and be alert.”