Are you in the market for a new car? Eco-friendly is the way to go these days. Here are 10 tips to help make sure you get the good end of the deal. 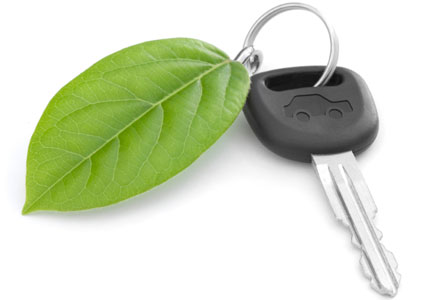 There’s more than one reason why eco-friendly vehicles are becoming more and more popular on the roadways. They’re nice to the environment, and they’re nice to your wallet when you calculate the fuel savings over time.

Buying one can be tricky, though. Use these tips to wade through all the dealership lingo and make sure you drive home a car that you like, that fits your needs and that really is as green as it can be.

You may not think the color of a car makes it more or less eco-friendly, but it does.

“Go green by picking white,” says racing champ and auto enthusiast Brian Massie. “The lighter the hue, the less work that has to be done by your AC system. On a moderate summer day, the interior of a black car can heat up 10 degrees hotter than an identical white car. White cars tend not to show dirt as much as many other colors, so you’ll [have less of a need] to wash the vehicle.”

Can you drive a manual transmission? If not, it may be time you learned.

All those extras on your car may make it nice to look at, but they don’t do anything for its eco-friendly factor. Keep those lines clean if you really want to conserve energy.

Adding spoilers may help, but only if you choose the right ones.

“Most rear-mounted spoilers do little to help performance, make the vehicle more cumbersome to wash and tend to actually cut into fuel economy,” says Massie.

Instead, he recommends front “chin” spoilers, saying they “reduce the amount of air underneath a car, thereby reducing drag and lift, making the car more stable and more efficient.”

Deisel engines sometimes get a bad rap, but they’re actually pretty eco-friendly, according to Massie.

They’ll save you money in other ways, too.

SUVs and crossovers are the superstars of the road these days, but your best bet is to embrace a body style that’s a bit of throwback. Massie recommends buying a station wagon if you need a little more room than the average sedan offers.

“Resisting the temptation of an SUV helps you and the environment in practically every way possible,” he says. “With interior space similar to many crossovers and small SUVs, the station wagon delivers better fuel economy, better handling and better acceleration. With a weight penalty of usually only 100 pounds, many wagons get the same or nearly the same fuel economy as their sedan counterparts.”

Chances are, you’ve never even asked about the suspension of a car you’ve considered buying. It does have an effect on the car’s eco-friendliness, though.

“The more grip a vehicle has, the less the brakes need to be applied before a turn. Using the vehicle’s momentum to carry you through a turn burns less fuel,” explains Massie.

For that reason, he recommends selecting a vehicle with a sport suspension.

Electric cars are super eco-friendly, but only if they’re charged up. Cristi Landy, marketing director for the Chevrolet Volt, says access to plugs at the places you frequent most is a huge factor when deciding whether or not one of these cars would work for you.

“If you’re interested in an electric car, would you be able to plug in a car at home or at work?” she asks. “Most electric vehicles require a stand-alone 12-amp plug to charge. A Volt takes 10–12 hours to charge for a 38-mile charge.”

Once you narrow down your choices, talk to the people who know most about the models you’re interested in — not the dealers, but other owners.

“Owners enjoy expressing their opinions and sharing their experiences with others,” says Landy.

Read reviews and connect with owners on online forums and manufacturers’ Facebook pages.

Look for something built to last

The most fuel-efficient vehicle in the world won’t be very eco-friendly if you’ll need to replace it in a few years. Do your research and choose a car that’s projected to stay on the road for years to come.

“Picking a vehicle with a strong reliability rating is paramount,” says Massie. “Given the amount of energy it takes to produce a vehicle, an eco-friendly vehicle has to provide reliable service for a long time.”

“Some manufacturers carry an ‘eco’ version of a standard model… with a considerable uptick in price,” warns Massie. “Other than [the fact that they have] low-rolling-resistance tires, these vehicles are just usually standard models lacking some weighty things like a spare tire. Some manufacturers go so far as to install a lower-performance suspension, weaker brakes and a smaller fuel tank in order to trim weight, but at what penalty?”

Instead of springing for that high-cost “upgrade,” Massie recommends you consider skipping the eco model.

“Buy a car you really like, and keep it in good tune. When the tires wear out, if you want to squeeze an extra 0.4 MPG highway, then buy a set of low-rolling-resistance tires,” he says.

How to get the most out of a test-drive
10 Things to consider when buying a new car
Green goddess: Best cars for eco-friendly gals

12 hrs ago
by Danielle Cohen

15 hrs ago
by Brittany Leitner