Given the number of animals awaiting potential execution for lack of a loving home, we encourage you to skip the fancy breeders and bring home a mixed breed you’ll love just as much. Still not sold? These SheKnows readers and contributors may just change your mind. 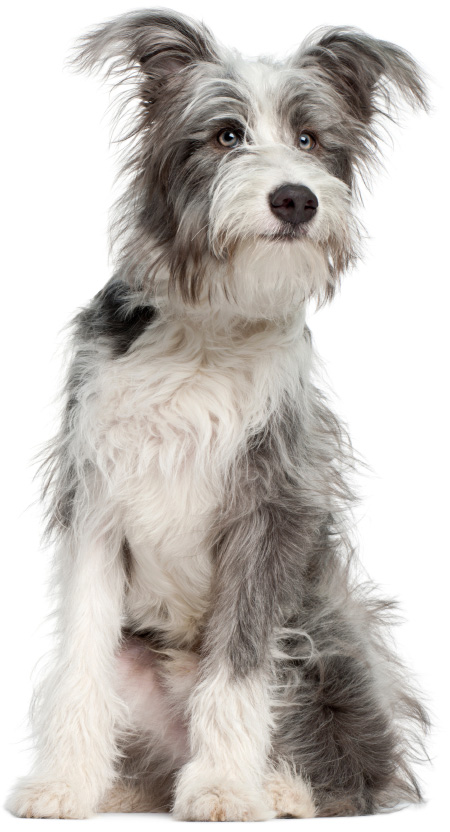 Given the number of animals awaiting potential execution for lack of a loving home, we encourage you to skip the fancy breeders and bring home a mixed breed you’ll love just as much. Still not sold? These SheKnows readers and contributors may just change your mind.
There are advantages to picking a purebred dog. I mean, you know exactly what you’re getting, right? Or do you? While the “look” of the pup you’ll bring home is more consistent with a purebreed, so are the health problems

According to petMD, purebred dogs suffer from one common issue. Because you need two animals that come from the same gene pool, an already limited gene pool, many unscrupulous breeders in the past have actually bred animals from the same family gene pool, which has led to defects that may cause “a higher risk of cancer and tumors; eye and heart disease; joint and bone disorders; skin, immune system and neurological diseases; and even epilepsy.

Not only that, but consider these tragic facts we got from Ruth Steinberger, pet overpopulation expert and founder of Spay First.

In addition to these facts, our readers should know that it’s not impossible to find purebred dogs in need of adoption. They may not have papers, but unless you plan to show them, that doesn’t matter to most people.

We reached out to real people like you to find out why they thought adoption was worth it. Please read their stories before making a decision. We think they’ll convince you that adoption is the way to go. 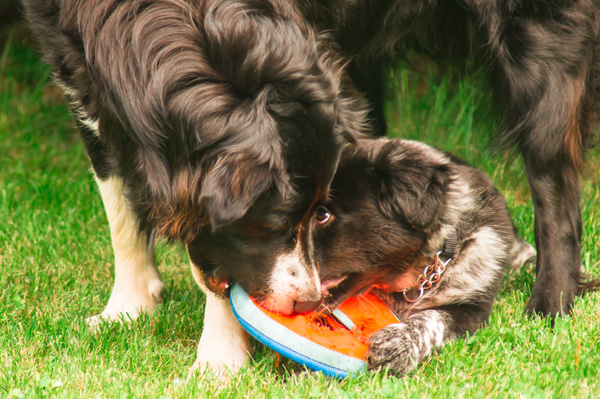 Professional photographer and owner of Keep the Tail Wagging (an online magazine for dog lovers) Kimberly Gauthier told us about the sweet foster dog Riley who died too young, but gave her and her husband a reason to open their home to another pet and inspired her to put her heart and soul into her blog.

“We have three dogs at home and they’re all mutts. [This] story is about Blue, who wasn’t planned.

“Last year, my boyfriend and I decided that we wanted to do more for dog rescue and opened our home for fostering dogs. I fell in love with [a dog named] Morgan and cried for a day when we found him the perfect forever home. He’s so happy and I’m glad that we did it (it was more my boyfriend’s idea than my own).”

They got their second dog, who they named Riley, but tragically, Riley died from canine parvo virus just a little over a week after they got her.

Kimberly continues, “This absolutely broke our hearts and I struggled for weeks trying to understand why we lost such a great, sweet puppy. We both agreed that if she had to die, at least she died loved by her family.

“I wanted to adopt another dog because Riley showed us that we had the room and time for one more dog and I started looking even though my boyfriend wanted to wait at least six months. We wanted a dog that had Riley’s spunk and personality and we thought this would be hard to find.

“Browsing on a local rescue group’s site, I came across a video of our sweet boy Blue. My boyfriend was interested, but not convinced until we met Blue and it was love at first site.

“Blue has been the perfect addition to our family and we still talk about how lucky we are to have found Blue. It’s like Riley came into our life briefly to show us that we could have a third dog and then inspire us to look for him. He has Riley’s energy, spunk and happy personality and he’s healthy as a horse.

“I will always be thankful to Riley for bringing us our Blue. The addition of these two mutts into our lives has turned my blog [Keep the Tail Wagging] into an amazing site that I love to work on every day!” 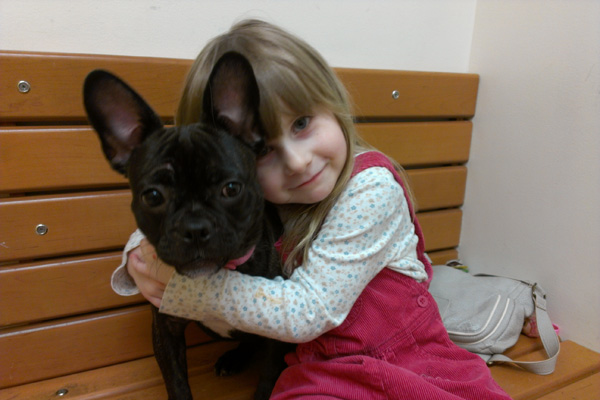 Petrina Hamm, a certified personal trainer and mom, tells about her adorable daughter Stella’s sweet mixed breed Pepper, and Pepper’s impact on her family, including why Pepper may become even more important to little Stella as her family goes through a significant transition.

“Our family adopted a wonderful little rescue dog all the way from Missouri (I drove to Georgia to pick her up) that we named Pepper.

“She’s a French bulldog/pug mix that has brought so much joy into our lives. She’ll be a lifelong friend to our youngest daughter, Stella (a 4-year-old going on 40), who absolutely adores her.

“We’re a blended family with four kids and it won’t be too long before Stella’s older siblings will be off to college. The kids fell in love at first sight from a picture (gotta admit, my husband and I did too).

“She’s brindle and over the past month or so, her ears have stood up like a French bulldog’s typically do. She’s small with a huge personality and a cute little pug nose. She really is our fifth child.

“I think mutts are wonderful; I can say in Pepper’s case, it’s like she’s taken on the best possible traits of both breeds. There are so many mutts out there who need a good home and a loving family.” 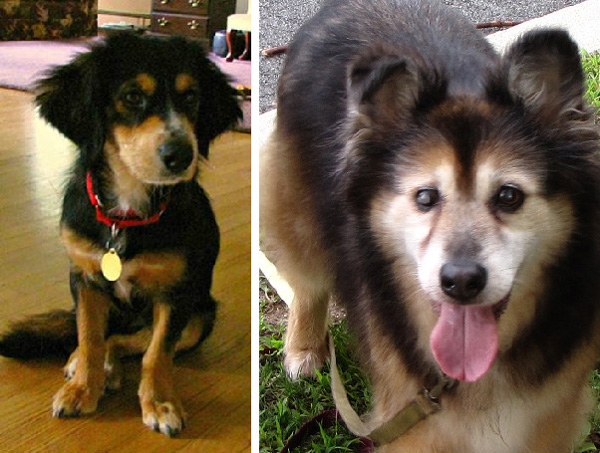 Janet Pfeiffer, motivational speaker and president and CEO of her own seminar company, and her husband adopt abused animals. Janet tells us how the inexplicable instincts of a foster puppy’s “mom” have healed her after the tragic loss of a beloved pet.

“My husband and I adopt abused mutts. One of the most touching stories was Baby Halle. She had been used for medical research for the first seven years of her life. Confined to a cage, isolated in a sterile environment, she had no contact with humans or the outside world (except for those who “cared” for her).

“At age 7, she was brought to a local shelter where I adopted her. From the moment we met, we shared a deep bond that I have never had before with any of my (15 total) dogs. Halle never left my side for the next 8-1/2 years. Then on May 6, 2011, she collapsed and died suddenly (she was 15-1/2). I was devastated. I brought her home and we buried her in the backyard.

“My grief was unconsolable but I knew in my heart I would adopt again (we still had two other adopted mutts). I had seen a cute mutt on the internet and decided to go look at her. She was in a foster home and had been promised to another family. But when the foster mom met me, she felt very strongly that I was meant to take this little girl home and make her part of my furry family. So I did.

“Within a few days, my husband and I began to notice something very unusual about Willow. More and more, she displayed the unique and quirky behaviors of Baby Halle. She even answered to Halle’s name. I felt a very strong presence of Halle in Willow.

“But, here’s the clincher: Reba (our oldest and alpha dog) was very maternal towards Halle. Halle suffered from eye problems and Reba constantly licked Halle’s eyes, to the great pleasure of Halle. She loved it. Reba began licking Willow’s eyes in the same way, even though she has no eye problems.

“I soon came to realize that the bond between Halle and I could not be broken through death. Halle’s spirit lives in Willow’s body and every day I get to enjoy two furry babies in one.” 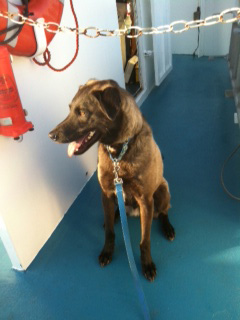 Social media entrepreneur Sarah Parker Young tells us the harrowing story of the 8-week-old lab mix who at his tender age has survived more than just Hurricane Ike to make it into her loving arms.

“Four years ago, I adopted Spencer from Labs4Rescue after my son Dan saw him online. He looked like a typical 8-week[-old] black Lab puppy in the photo.

“He had a heartrending history; left in a carport in a rainstorm then bitten in the head by another dog in his foster home. After that, he had to be evacuated from New Orleans during Hurricane Ike and when he was there, he developed kennel cough. I was not sure it was meant to be.

“When he arrived in Danbury, Connecticut at 12 weeks old, he had silver in his coat and a curled-up tail. I thought he looked a very funny sort of Lab [because he’s a mixed breed].

“Since then, his coat has turned two-tone silver and black and people always say how handsome and unusual he is! He is very attached and seems even more loving now that he has a safe and happy home.”

Is pet fostering for you?
What to do when you can no longer take care of a pet
What a pet breeder won’t tell you