President Obama has helped shine a bright light on the Washington, D.C., food scene due to his love for dining out on the town, but you don’t need to be a government official to enjoy the bites D.C. has to offer. Here’s a list of the newest must-visit restaurants in the capital city! 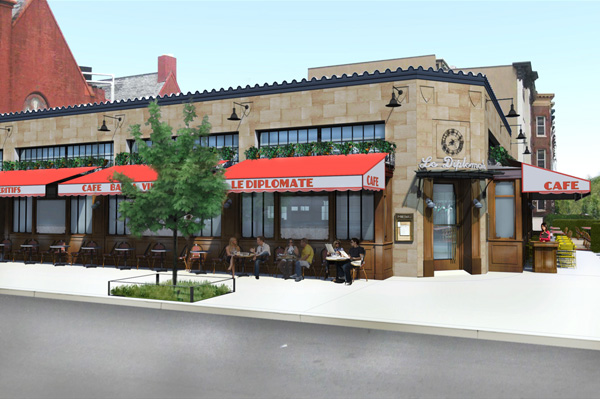 Acclaimed restaurateur Stephen Starr will make his first foray into the D.C. hospitality scene with the opening of Le Diplomate in Logan Circle. Slated to open in late March, Le Diplomate is inspired by Starr’s Philadelphia restaurant Parc, and will offer Parisian brasserie-style dining. Chef Adam Schop will serve approachable French fare like omelets, steak frites and quiche, as well as escargots, rabbit rillettes and shaved veal tongue with mache for more adventurous palates. The restaurant will also feature an in-house bakery as well as seasonal indoor/outdoor seating for 260.

After a brief stint on Top Chef: Seattle Chef Bart Vandaele of Belga Cafe has returned to D.C. to open his first new restaurant in almost 10 years. Opening in Logan Circle next month, B Too will pay homage to Chef Vandaele’s Belgian heritage, offering playful interpretations of the current Belgian food scene. The bi-level restaurant will feature seating for 160, a chef’s table, two bars, a waffle-and-frites bar and a private dining area. In addition to roasted lobster, Belgian steak, and mussels, B Too will offer a selection of over 150 Belgian beers.

The Grill Room and Rye Bar

Next month, Georgetown will not only welcome the new Capella Washington, D.C., Georgetown hotel, but also two new concepts — The Grill Room and The Rye Bar. Helmed by Swedish Chef Jakob Esko, The Grill Room will specialize in hand-cut, artisanal meats and the highest quality seafood. Daily printed menus will include dishes like grilled American wagyu served with a pancetta and onion tart with truffle and fortified wine sauce, and grilled rockfish garnished with a slow-cooked ginger glaze and orange. Adjacent to The Grill Room is The Rye Bar, which will feature only 26 seats and a selection of rare rye whiskeys complemented by a “hard-harvested ice program.”

Chef Mike Isabella has been busy! As if releasing his late-2012 cookbook, Mike Isabella’s Crazy Good Italian, wasn’t a big enough project, he’ll be opening not one, but two restaurants on 14th Street in late spring. The 150-seat Kapnos will draw inspiration from Northern Greece, creating a menu of spit-roasted lamb, goat and chicken, as well as spreads, breads, phyllo pies and Chef Isabella’s signature wood-grilled octopus. Next door to Kapnos, foodies will find G, a 40-seat traditional Italian sandwich shop. Think chicken parmesan, veal cutlet, sausage with peppers and meatball sandwiches for lunch, and a four-course, $40 tasting menu of antipasti, pasta, meat or fish and dessert for dinner.

31 mins ago
by Sydni Ellis

1 hr ago
by Erika Janes

8 hrs ago
by Summer Cartwright