Would you know what to do if your vehicle went into skid? We asked driving pro Eddie Wren for his lifesaving tips. His advice? Learn how to prevent a skid before it happens. 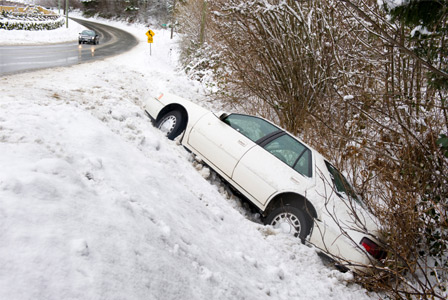 Don’t be a know-it-all

When we asked Eddie Wren, president and chief instructor at Advanced Drivers of America, about skid recovery, we thought he’d recommend a driving class. (After all, he is a driving instructor!) We were surprised when he said skid-recovery classes are a terrible idea. “Even though it seems obvious that drivers should be taught ‘how to get out of a skid,’ 40 years of research from the top road safety research centers around the world has repeatedly and unequivocally shown that teaching people how to get out of a skid not only is ineffective,  but much worse.”

In fact, people who get skid-recovery training are more likely to crash after getting such training than those who don’t get the training. While this sounded crazy at first, Wren says he now understands the primary reason for this phenomenon is that people (especially young people) who get skid-recovery training develop overconfidence — a subconscious belief that “even if I skid, I can get out of it.” The result is reckless driving and more crashes at higher speeds.

Prevent a skid before it happens

Preventing a skid is far, far more important than any attempt to recover from one, says Wren. “Needing to attempt a ‘cure’ is the result of bad driving, and such attempts are by no means a guarantee that nobody will be hurt or killed — you or somebody else.” Wren says the top causes of skidding are:

In short, the best way to avoid a skid is to drive at sensible speeds, be prepared to slow down significantly if you are concerned about the conditions, and use the vehicle controls (brakes, gas pedal, steering and clutch) gently and in a timely manner.

How to recover from a skid

If you do find your vehicle in a skid, Wren tells drivers to remember the following: