It’s probably not surprising that quirky actress Zooey Deschanel loves scouring the thrift shop for deals. Still, we love her for it! 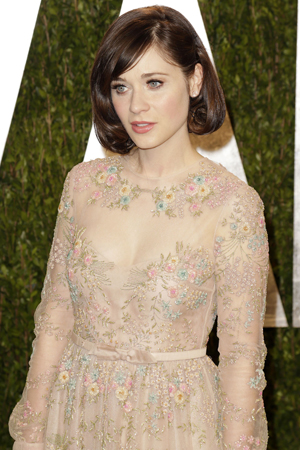 Zooey Deschanel might have millions now, thanks to her successful movie career and hilarious role on FOX’s New Girl, but she’s still a thrifty girl at heart. The Los Angeles native told InStyle in a new cover interview that women can be just as fashionable in secondhand finds as they can in couture dresses.

“Style isn’t when you buy yourself the most expensive things. It’s being creative and able to put together what you’ve collected,” she told the magazine, adding that she learned that while struggling to make it in her career. “I didn’t have a lot of money, so I got things for, like $2, $3, and made myself look as good as I could. Limitations make you more creative.”

Totally agree with that.

Also, swoon. We love it when celebrities — including Kate Middleton — show off a good deal. The pregnant duchess recently delighted fans when she stopped at a London Top Shop to buy a $55 maternity dress from Lovestruck.

“It’s so exciting that the Duchess of Cambridge bought one of my designs,” Lovestruck designer Erika Shaw told US Weekly in early March. “I think it’s great that Kate wears high street brands.”

The Sessions actress Helen Hunt even shops at H&M — she wore a creation from the retailer to the 2013 Academy Awards. Unfortunately, that dress — reportedly worth about $650 — won’t be sold in stores.

Not all hope is lost, though! The Swedish clothing retailer later told the New York Times that it’s planning a “red carpet collection” for release sometime later this year.

“This is a way for us to show we can do so many more things than what we have in our stores,” Ann-Sofie Johansson, H&M’s head of design, told the Times of the collaboration with Hunt.

Stylish and affordable? We’ll take that over stylish and expensive any day!