Want to share a pool with Rihanna or dine next to Kim? Here are the top four hotels in New York City where you might casually run into your favorite celebrity. 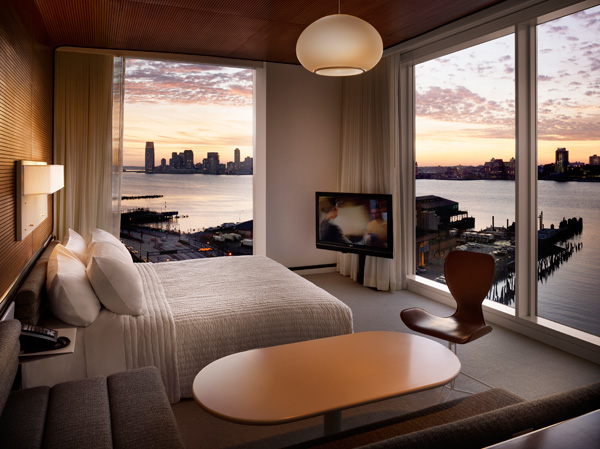 Can you ever go wrong with an André Balazs property? From Los Angeles to New York, André Balazs hotels have been the favorite of young, hot Hollywood for decades. Originality is the focus of The Standard, High Line — from its “Peeping Tom” design (all rooms feature floor-to-ceiling, wall-to-wall windows) to the legendary party spaces, the opening of this Meatpacking District hotel raised the bar for the New York City hospitality scene.

Built above the High Line Park, the former elevated railroad that has been developed into a public park, The Standard, High Line features unparalleled views of the Hudson River and New York City skyline. Two of the “toughest doors in Manhattan” can be found at The Standard, High Line — the Top of The Standard lounge (formerly The Boom Boom Room), and Le Bain Discotheque, a rooftop bar that also features a seasonal plunge pool. A-listers including Madonna, Miranda Kerr and Jay Z have all flocked to this hotel for exclusive events and nights out on the town.

Contemporary. Sleek. Ultra-sexy. All adjectives that can describe any of the properties in the Gansevoort Hotel Group portfolio, which is probably why this brand is a celebrity favorite. Gansevoort hotels have a history of transforming the neighborhoods that surround them, starting with Hotel Gansevoort, which helped transform the smoking-hot party neighborhood of the Meatpacking District. 2010’s Gansevoort Park Avenue followed this trend after opening in the newly branded neighborhood — Nomad (North of Madison Square park) — bringing celebrities and stylish visitors to a neighborhood they’d most likely never visited before.

Kim Kardashian and her then-husband Kris Humphries famously lived in the Presidential Suite during the filming of  “Kourtney and Kim Take New York,” and pop queens Christina Aguilera and Katy Perry like to call the hotel home when they visit the Big Apple. Maybe it has something to do with the loft-ceiling, luxury rooms and the hotel’s heated indoor-outdoor rooftop pool that features unobstructed views of the Empire State Building. Or perhaps celebrities love the fact that after a night of partying in the tri-level rooftop bar and lounge, they can unwind at Exhale, the mind-body spa best known for its unique spa therapies and transformational Core Fusion fitness program. 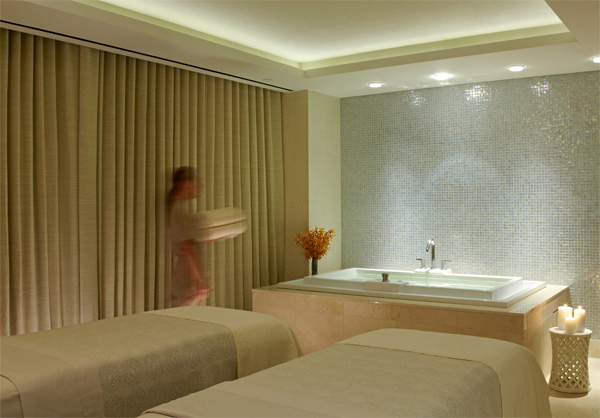 The Trump name has become synonymous with opulence and decadence, so it’s no surprise that the first Trump branded hotel property in downtown New York would offer nothing less than the very best. Located in the fashionable SoHo neighborhood, the 46-story hotel is steps away from famed art galleries, celebrated restaurants and boutique shopping. Starlets like Rihanna and Jessica Alba have enjoyed the spacious, residential-style guestrooms complete with custom furniture and personalized room environment settings.

New nightclub “The Spot” is a favorite of Leonardo DiCaprio, and the seasonal indoor-outdoor Bar d’Eau has played host to many star-studded events. The real pièce de résistance is the 11,000-square-foot Spa Trump, which features nine private treatment rooms, a spacious fitness center, and for those who are used to a personal assistant at all times — a Spa Attaché who guides guests through an array of services and products exclusive to Trump SoHo.

Note: Celebrity names have not been verified by Trump SoHo New York.

Located in the heart of the East Village, The Bowery Hotel is the definition of downtown chic. Staying true to its “hipster” location, the design of the hotel strays away from the uber-modern and instead provides a warm, homey feel. Plush, vintage-inspired furniture, hardwood floors covered by Turkish rugs and earth-tone decor with splashes of bold color all make for a relaxing environment for even the most discerning travelers.

The Bowery Hotel is notoriously hush-hush regarding their celebrity clientele, but perhaps that’s why they have so many repeat celebrity customers. Katie Couric hosted her 50th birthday party at the hotel, and Paul McCartney held a bash after his 2011 wedding in the 12,000-square-foot indoor/outdoor event space at the hotel. Gemma, The Bowery’s rustic Italian restaurant, is also a favorite of neighborhood residents Chrissy Teigen and John Legend.

Avid Coffee Drinks Say This Whitening Gel Helped Remove Stains on Their Teeth ‘Immediately’ & It’s Buy One, Get One Free