Kate Middleton is just like us! Well, “just like us” in that she pays for her clothes. 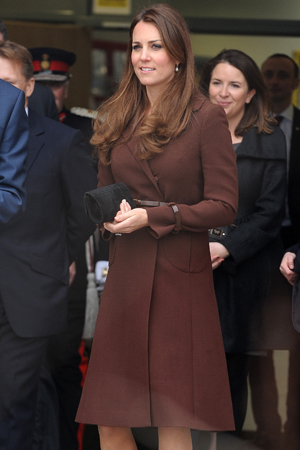 Want to know why Kate Middleton recycles her outfits? She pays for all of them — and money doesn’t grow on trees!

It’s true: Middleton doesn’t accept free clothing from designers, according to one of her go-to clothiers.

“She doesn’t take free clothes, and I’ve heard that from other people who sent her things,” designer Katherine Hooker told The Huffington Post. Instead, “she always comes to the shop, which is nice. And we’ve sent her a few things when she didn’t have time to come in.”

It makes sense — and we applaud the mom-to-be for it, especially since many celebrities worth millions of dollars regularly get free clothes or even get paid to wear designer garb.

The revelation also takes all the drama out of the “Kardashian diss” from last fall.

“While she was in London last week, Kim had several free dresses from her Kardashian Kollection sent to Princess Kate,” a source told Marie Claire UK in November. “She hoped Kate might be seen wearing one of the designs out in public, which would give their fashion credentials a huge boost.”

Instead, the Duchess of Cambridge send the clothing back — and “sources” said it was because she didn’t want to be associated with the reality TV family.

“The Kardashians want to be as big in the UK as they are in America, and think associating themselves with the royals, especially Kate, will help them achieve that.”

But no real drama here — Kate just doesn’t do free clothes. Instead, she sticks with what she knows suits her.

“Her style was fairly appropriate for the role that she’s currently in ten years ago, so it didn’t need to change,” Hooker continued.

“She’s just an incredibly lovely person,” the designer continued. “It couldn’t happen to a nicer person, as they say.”