The next time you reach for your cell phone while driving, pretend it’s a bottle of beer. You wouldn’t take a swig of alcohol while driving, but did you know texting while driving could be even more dangerous? 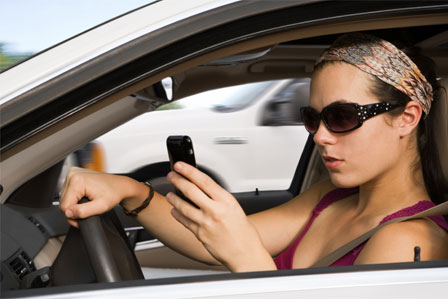 In October 2011, the first research study involving actual moving vehicles (not simulators) was conducted by researchers at the Texas A&M Transportation Institute to evaluate the dangers of texting and driving. The results were even worse than previously thought. Drivers on a closed course were evaluated for response times while reading and writing texts while driving. Their responses to a flashing light were measured as they navigated an obstacle course — first without texting, then while texting. It took texting drivers twice as long to respond to the flashing light. Swerving, high speeds and lane drifting also shot up when drivers’ focus was on their phones and not on the road. No surprise, right?

So texting from behind the wheel isn’t a good idea, but is it really worse than driving drunk? A 2008 study conducted by the Transport Research Laboratory in London says yes. TRL researchers found that drivers who texted demonstrated reaction times 35 percent worse than when they drove without any distractions at all (compared to 12 percent worse when driving while intoxicated). The researchers discovered that there was a significant decrease in ability to maintain a safe driving distance between vehicles while texting, and that steering control dropped by 91 percent compared to driving with no distractions. Overall, the study concluded that “when texting whilst driving, a driver may present a greater accident risk than when at the legal limit for alcohol consumption.”

With multiple research studies showing that texting while driving causes greater impairment than drinking, wouldn’t it make sense for laws to forbid such a dangerous activity? Unfortunately, it depends on where you live. As of March 2013, the Insurance Institute for Highway Safety reports that text messaging is banned for all drivers in 39 states and the District of Columbia. Additionally, it is against the law for novice drivers to text while driving in five states (Mississippi, Missouri, New Mexico, Oklahoma and Texas) and it’s illegal for school bus drivers to text in three states (Mississippi, Oklahoma and Texas). That means the roads are full of distracted drivers who can text freely while driving in 11 states.

If you live in a state where texting is still legal, and you’re tired of having distracted texting drivers swerve into your lane on a regular basis, do something about it. Contact your state legislators and express your concerns. Demand that action be taken to ban an activity that has been proven to be more dangerous than driving while intoxicated.

For additional information and resources on texting and driving, visit Distraction.gov, the “Official U.S. Government Website for Distracted Driving.”

Just in case: Extended warranty tips
What to do when you need a tow
“Lemon law” and how it protects your purchase