Moms are familiar with the dreaded “sag” that comes after labor and breast-feeding. However, Jersey Shore star Nicole “Snooki” Polizzi isn’t about to let her girls sag. 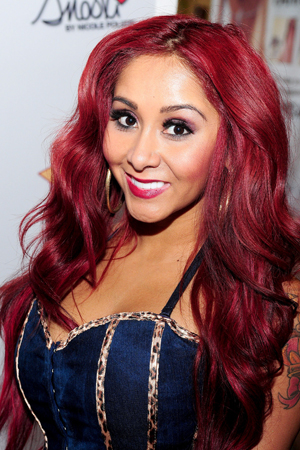 Jersey Shore star Snooki is known for her fake persona. Well, she’s not necessarily fake, but her makeup and hair certainly are (most of the time).

And her hair and makeup aren’t the only things she likes to keep artificial: The reality star and new mom told xoVain that she plans to get breast augmentation surgery to keep her breasts perky and round.

I’ve always wanted a boob job because I have big boobs, but when I take the bra off, they sag. I hate that,” she told the site.

However, it’s not going to happen until she’s finished having children with fiancé Jionni LaValle.

“Everyone’s telling me to get them done after I have my kids,” she continued. ” So I’m going to pop ’em out and then get a boob job. I love Jenni’s [JWoww] boobs, and I want boobs like that. And I think Jionni does too.”

But that’s the only surgery the pint-sized pickle lover is willing to have done to her body. She added that the worst part of pregnancy is the dreaded “mommy pouch” — or lower part of the stomach.

“It takes a while to get rid of the stretch marks, too. Stretch marks suck. They came the ninth month. I was like, really?! I thought I was free from them, but I wasn’t,” she continued.

But, what does Jionni think of a wife with breast implants?

Do you think Snooki should get post-baby breast implants? Sound off in the comments below!