Anne Hathaway pulled the ole “last-minute switcharoo” at the Oscars. Now, we finally know why she ditched Valentino for Prada. 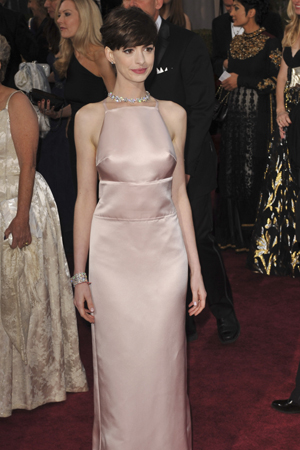 Oscar-winning actress Anne Hathaway was supposed to wear a custom Valentino creation to the 2013 Academy Awards — and Valentino even sent out a media alert with the scoop — but then Hathaway showed up in that pink (and polarizing) Prada gown.

Everyone wanted to know: What in the world happened?

She wasn’t snubbing Valentino — it just turned out that the dress was too similar to the Alexander McQueen gown Seyfried was wearing to the ceremony, according to sources.

It apparently all went down a few hours before the Oscars. According to US Weekly, Hathaway texted her Les Misérables co-star to see her dress.

“What are you wearing? Can you send me a picture of it?'” Hathaway texted Seyfried, according to the source.

What do the stars’ Oscars styles reveal about their personalities? >>

And the dresses were just too similar, so she switched.

Hathaway didn’t get into the designer drama on the red carpet though, telling Ryan Seacrest that the dress was one “that spoke to me.”

“My dress is Prada, and I didn’t know what I was wearing until about three hours ago,” she added to the E! News host.

“No, I think I was just working too hard,” she answered back.

And now she’s apologizing for it.

“It came to my attention late Saturday night that there would be a dress worn to the Oscars that is remarkably similar to the Valentino I had intended to wear, and so I decided it was best for all involved to change my plans,” she told People Tuesday afternoon.

“Though I love the dress I did wear, it was a difficult last-minute decision as I had so looked forward to wearing Valentino in honor of the deep and meaningful relationship I have enjoyed with the house and with Valentino himself,” she continued. “I deeply regret any disappointment caused.”

No apology necessary, Anne! It’s your choice, after all.

Did you like Anne Hathaway’s Prada dress at the 2013 Academy Awards? Sound off in the comments below!

Get the look: Jennifer Lawrence’s Oscars hair
Whitney Port on Jessica Chastain: She was “too safe”
Naomi Watts dazzles in a futuristic Oscars gown