Zoe Saldana goes asymmetrical (and gorgeous) in her black, gray and white Alexis Mabille Couture gown at the 2013 Academy Awards. 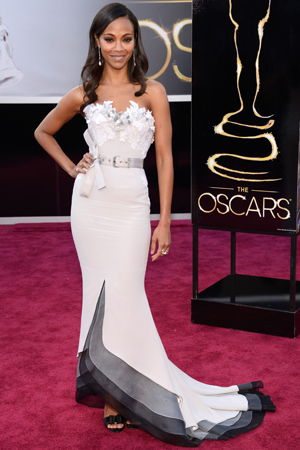 Saldana picked a lesser-known name to create her Oscars look, but she told People that she loves a variety of designers – the name doesn’t matter, just the style.

“So if I see an outfit from a designer that I really feel will complement my personality and I know that I would wear it well, I will definitely fight for it,” she said in 2011.

Her family might have something to do with that. The actress grew up in a family of talented seamstresses, so she was always around fashion.

“My grandmother and great-grandmother were seamstresses their whole lives, so when my grandmother moved to New York in the ’60s, she worked for design houses throughout the city,” Saldana told Gotham magazine last year. “She really loved fabrics and textiles, so it was natural to my family. Fashion wasn’t like a religion to us, but it is in my ancestry. It was never about luxury; it was about art.”

And that dress is certainly a work of art, Zoe.

Amy Adams wears Oscar to the Oscars!
Academy Awards dresses: Who did it better?
Jessica Chastain goes old Hollywood at the Oscars