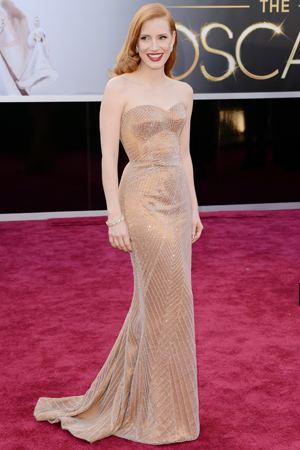 The actress definitely made that statement with the rose colored Georgio Armani Privé gown she wore to the 2013 Academy Awards.

Chastain — also adorned with Harry Winston jewels — told E!’s Ryan Seacrest that she picked the dress as a homage to Old Hollywood.

She deserves this gown.

Chastain — nominated for her second Oscar for Zero Dark Thirty — experienced her fair share of rejection in her career. She was so used to rejection that she told The Hollywood Reporter that she felt she was “cursed.”

“That was something we joked about: The Chastain Curse,” she told the magazine last fall. “I had worked for so long. I even played a dead body on TV. I did so many things. I finally got my big break.”

You have definitely arrived, Jessica.

What do you think of Jessica Chastain’s Georgio Armani Prive gown at the 2013 Oscars?

Academy Awards dresses: Who did it better?
Best dressed of Oscars past
Then and now: Oscar nominees’ fashion evolution