Bet you didn’t know that lowering the seat in your vehicle just might save your life! 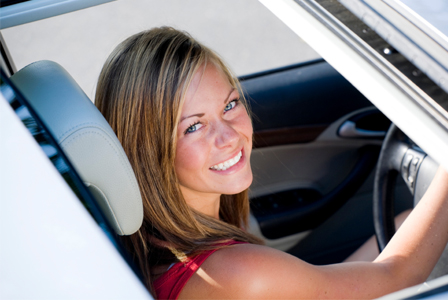 It’s no secret that pretty much everything you do behind the wheel has an effect on your safety. You might be surprised, though, to learn that even the height of your seat influences how safe you are on the road.

Related story 4 Safety Rules Your Family Needs to Follow at Home — Inside & Out
Tip: It’s important to adjust your steering wheel, too. Make sure it doesn’t touch your legs and doesn’t interfere with dash visibility.

The first thing you should do when you sit down in a car is make sure it’s adjusted to fit you. Everyone reaches for the mirrors and the steering wheel, but the height of the seat is often forgotten.

Race driver and high-performance driving instructor Ben Greisler says seat height is an adjustment that shouldn’t be overlooked. “Optimally, the seat will be set at a height that allows the driver clear view over the front of the car and to see the roadway directly in front of the car without having to raise her head,” he said. “Also, the seat should be far enough back from the steering wheel that the driver can rest her wrists on the top of the steering wheel without moving her shoulders off the seat.”

Ali Afshar, Subaru of America racer and former NHRA champ, says race-car drivers sit super low, mostly to help keep the cars from rolling over on the track. “In general, the lower the weight or mass of an object is to the ground, the better the car will handle. This is because a low center of gravity will help with balance and make the car less likely to tip over,” he explained.

According to Afshar, though, the car’s center of gravity isn’t always the most important consideration. “You do want the driver’s seat to be in the best position for visibility, so if you have to sacrifice a lower center of gravity for better vision, I would always choose vision,” he said.

The guys on the race tracks are probably a lot more in tune with their cars than you’ll ever be, but it is important to pay attention to your vehicle, both to keep you safe and to catch little issues before they become a bigger problem.

“We keep our seats as low as possible on a race car both for safety reasons and to be closer to the car’s center of gravity,” said race-car driver Carl Bowser. “The closer you are to the center of gravity, the more in tune you are with the car’s handling, which will help with control, speed and handling.”

Keeping you safe in an accident

Lara Tallman, professional driver and owner for Skullcandy Team Nissan, agrees that being closer to the center of gravity helps, but she also made a point that might hit closer to home for those of us who don’t spend our days behind the wheel of a race car.

“If your seat is lower, your head is not so close to the roof of the car,” she said. “Belts don’t always hold you secure enough, especially if you’re in a rollover, so every little bit helps.”

An article in Men’s Health Magazine explains that sitting higher actually makes you drive faster. They reason that the higher off the ground you are, the slower you feel like you’re going. For this reason, drivers of SUVs and large trucks tend to drive faster than cars that are lower to the ground, simply because those drivers are more in tune with their speeds. Keep this in mind when driving higher-sitting cars, and resist the urge to punch the gas without checking the speedometer.

Read more about cars and driving