Do you think taking a corner is nothing more than turning a wheel? Think again! 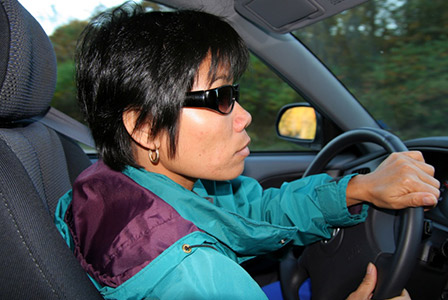 Those curvy roads are fun to drive, but there’s more to taking on those corners than just turning the wheel. SheKnows asked professional drivers for their secrets of the turn, and we’re sharing them with you.

You’re driving down the road and come up to a big curve. Should you aim for the yellow line or stay as close to the outside as possible? Most drivers agree that it’s best to stay near the outside of the road.

Race car driver and high-performance driving instructor Ben Greisler says you want to do whatever you can to make the turn as wide as possible.

“The turn should be taken to make the biggest radius,” he said, explaining that you should start and end on the outside, near the edge of the road, but hug the yellow line at the center of the curve.

Even more important than how you steer through a curve is how you go into it. The biggest thing to remember is to slow down.

“Do your braking prior to the turn and gently start to apply the gas as you hit the apex or the middle,” said Greisler.

“Feather the brakes lightly to slow down gradually as you approach it instead of slamming on the brakes,” said dirt-track race car driver Carl Bowser.

When things get tricky

If you don’t slow down in time, there are a few tricks to help you get through the curve at a faster speed.

“Don’t panic!” said Greisler. “Smoothly come off the gas and let the car slow. Don’t jam on the brakes, but slowly apply them so you don’t jolt the car. Look where you want to go, and you will make it through safely.”

Bowser said a fast curve is better taken on the outside, so hug the edge of the road if you hit one too fast.

“At a high speed, you’re going to be safer approaching the outside of the turn,” he said. “A tighter steering angle may cause your car to slide or even roll.”

If you do start to slide or spin, careful maneuvering may help to put things right. Bowser advised that drivers involved in a spinout should ease off the gas and turn slightly into the spin.

“For example, if you’re making a left turn and your car slides, the back end of the car will be going right. Turn the wheel slightly to the right to overcorrect,” he explained. “Then, feather brake the car lightly to slow.”

Having a little fun

It’s never OK to attempt a donut on a public street or near any other people or cars. However, there’s nothing wrong with having a little fun in an empty, privately owned lot, right?

Bowser explained that the best way to achieve a donut is with a rear-wheel-drive vehicle.

“From a dead stop, hold your foot on the brake and then slowly give the car gas until you start to feel the wheels spin,” he said. “Then, turn the wheel in the direction you want to donut and give it as much gas as you feel comfortable with.”

If you’re going to do a donut, you might as well do it right!

“When you’re done, I recommend doing it like I do — get out of the car, take off your helmet and wave to the fans!” said Bowser.