Jennifer Lopez and Taylor Swift made definite statements with their 2013 Grammy Awards outfits. Which do you like? 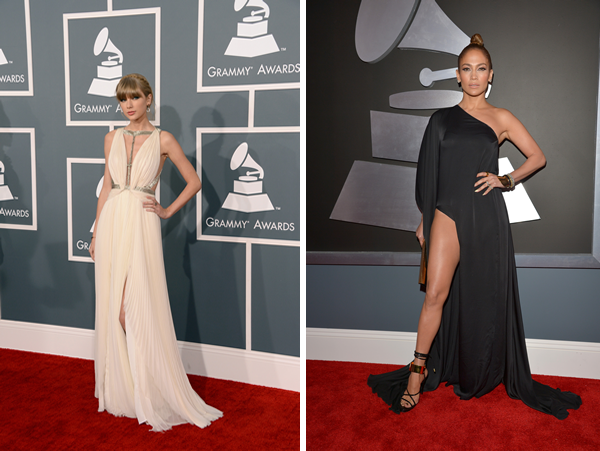 Jennifer Lopez didn’t let the new Grammy rules keep her from showing off a lot of skin: A lot of leg skin, that is. The singer wore a seriously asymmetrical gown to the 2013 Grammy Awards.

“They didn’t say anything about leg!” Lopez said of the Anthony Vaccarello dress. “I thought I was being such a good girl! A little shoulder, a little leg.”

The consensus? She’s sticking with this year’s Grammy color trend — all black — but it’s just too much. Either show some leg or some arm — not both. And the top knot? She needs to put a sock in it!

Then again, it’s hard to live up to the infamous Versace dress she wore to the 2001 awards. FYI: She still has the dress.

“I have that at home,” she said last week. “The other day, my housekeeper put it on a mannequin in my spa, where I get my hair and makeup done. She sent me a picture. She was like, ‘You like this dress?’ Um, yeah, but I don’t know if I like it out in the house!”

As for Taylor Swift? The Red singer is wearing a white Grecian-inspired gown by J. Mendel, complete with silver straps and a halo braid.

Oh, and just the teensiest bit of sideboob.

There’s nothing really wrong with the gown, but we just expected more — especially since she’s been rocking so many fab gowns during awards season.

Oh well, you can’t win them all.

Next: Carrie Underwood shines in Roberto Cavalli at the 2013 Grammys >>