Cynthia Rowley held her very first fashion show in her NYC apartment, inviting every important fashion editor and even Andy Warhol. None of them came, but Cynthia had the last laugh when she won a prestigious CFDA award in 1994. And did we mention that she now has more than 60 stores worldwide? 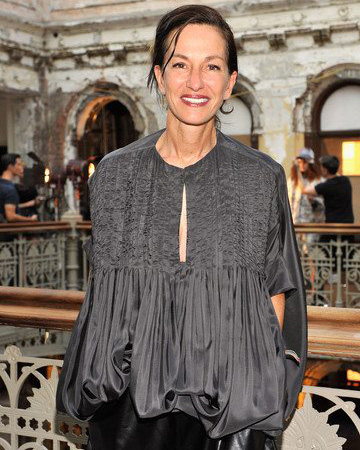 Of course, we RSVPed yes to hang with Cynthia during her pre-New York Fashion Week party to celebrate her new partnership with Lysol. In the midst of preparing for her own NYFW show, the designing mother of two sat down with SheKnows to share her style and parenting secrets.

SheKnows: What are your Fashion Week must-haves?

Cynthia Rowley: Lysol Touch of Foam, because you’re working with fabrics and you have to be clean and you don’t want your skin to be dry. And you definitely don’t want to get sick, because we all work in one space. If one person drops, the whole team goes. Also Juice Press… I’m such a fan of that. I just discovered it this Fashion Week and it seems to be working. And a sense of humor!

SK: What trends do you think we’ll see during Fashion Week?

CR: It seems like people are embracing black again. We’re doing an alternative presentation this year so it’s not a traditional runway show, and I feel like maybe people are starting to think about that. Maybe that will be sort of a trend. They seem a little boring to me, runway shows.

SK: When did you know that you made it?

CR: Winning a CFDA award feels really great and that’s still a huge honor, and getting nominated for other ones is always nice. I think when I stopped worrying about whether I was gonna be around. It takes a long time to build a really strong brand that can withstand a tough economy. When it gets to be really fun every day, I think that’s success.

SK: Who is your celebrity style icon?

CR: After the Super Bowl, I have to say Beyonce! We all came into work and couldn’t wait to talk about Beyonce and how awesome she looked.

SK: How would you describe your own style? 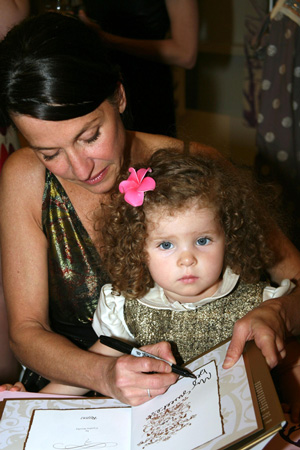 Cynthia with daughter Gigi Clementine in 2007

CR: There’s a certain amount of speed involved! I’m usually dropping one or two kids off at school and making breakfast and everything else, so speed is important. I try to somehow bridge the tough, tomboy with the more feminine and girly, so it always has a sporty edge and mixing those two.

SK: What’s your favorite part of being a mom?

CR: Everything. It’s really the best thing in the whole world. It’s so much fun and makes me so happy. I sort of reinvented my work life when I had my second daughter. I now live and work within a two-block radius so they come and hang out with me all the time. Like everything, it’s a balance. I had to figure out a way to work as much as I do because it’s important to me, but I also can’t get enough of hanging out with them. My daughter wakes up in the morning and says ‘Tickle me!’ It’s like living with two stand-up comedians.

SK: What’s the best advice you’ve been given?

CR: Hard works pays off and be thankful for everything. Be inventive and be curious all the time.

SK: What’s the best advice you’ve ever given someone else?

CR: I try to tell people to be yourself and take chances. Be as different as you can be.

SK: What’s one fashion rule every woman should break?

CR: Haven’t they all been broken already? I don’t know if there are any rules left to break!

SK: You’ve partnered with Target, Band-Aid and Roxy before. Why did you get involved with Lysol’s Touch of Foam label design contest?

CR: I think it’s really cool because it’s reaching out to everyone in America to show their creativity and be able to express themselves in a way that people are going to notice. (Editor’s note: Plus, the winner wins a trip to New York Fashion Week and a shopping spree!)