Pets that are people-, child- or pet-aggressive can put a real damper on any plans of letting Fido or Socks come play with the family. Keeping your fur-baby friendly starts with the proper socialization. 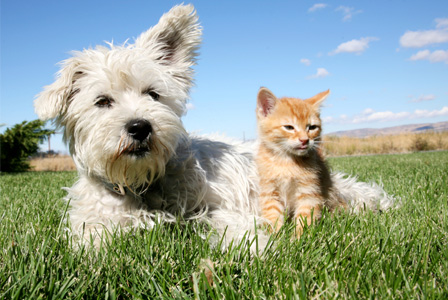 Properly socialized dogs are less likely to be given away or (every owner’s nightmare!) euthanized for aggressive behavior. Properly socialized cats are a must in a multipet household. While we’ll primarily focus on dogs and cats (because not too many people need to socialize a bunny), much of this info goes for any pet.

How not to socialize a pet: immersion therapy

Quick tip: Alway follow up positive socialization sessions with treats for both dogs and cats!

Many pet owners believe they’re being responsible by ensuring their pets are exposed to other dogs, cats and people (including children) at a young age… which is true (sort of). In a blog post on her company’s website, Laura VanArendonk Baugh, owner of Canines In Action, says, “good socialization introduces a puppy or dog to something new, maybe even challenges them a little, and gives them a good experience with it.”

While VanArendonk Baugh’s expertise is in canine training, her point is no less valid for feline pets. The reality is, simply exposing an animal to a new experience isn’t enough. Those experiences must be positive ones. If every time you put a hand out to greet a stranger when you were a kid, you got a good jolt, you probably wouldn’t be too keen on shaking hands as an adult, right? It’s the same way for your pet.

When to socialize your pet

It’s best to begin the socialization process early. For puppies, that’s between three and 12 weeks old. For cats, between two and seven weeks of age. During those weeks, they’re genetically programmed to be more opened to new experiences because they’ll be taking in a lot of new sights, sounds, scents and textures while they still get that TLC from their mamma. But after that age, they gradually become less open to new experiences, another bit of genetic programming intended to keep them safe when they encounter a potentially dangerous situation and Mom’s not around. 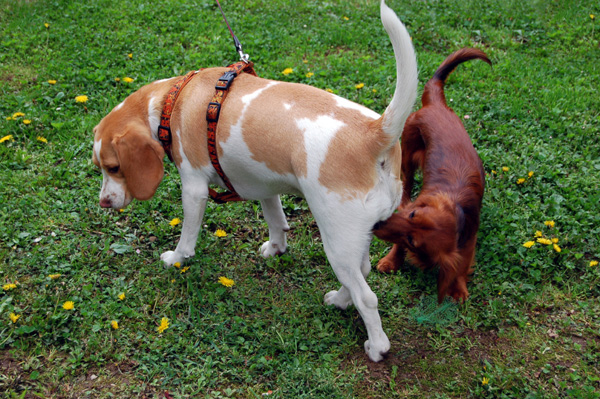 Before you unleash your pooch on a
dog park adventure,
read these tips!

Socializing is a bit different for cats than it is for dogs, but overall, the rules are the same.

Don’t put your pet in a situation in which they’ll have a negative experience. Every negative encounter can damage their ability to be good fur citizens later. A dog who gets into a fight at the dog park learns to fear (and may become aggressive toward) other dogs. A cat whose ears are pulled by a child will learn that kids should not only be avoided, but perhaps scratched if they approach.

When it comes to play activities, don’t tolerate aggressive behavior toward humans. Yes, play fighting is part of the way they learn the skills they need for hunting and protecting themselves, but play fighting should be reserved for toys and their peers. Human fingers are not toys. If they attempt to do it, give them a firm “no!” but don’t scream or hurt them (that will only foster distrust).

Puppies and kittens should become accustomed to being handled by humans. Just take at least 15 minutes at a time a few times a day. Scratch her little head, then rub her paws and belly. If she reacts favorably to a particular spot, keep scratching. Speak to her in a low, soft voice so she learns that being in your arms is a safety zone.

As your pet gets more comfortable, try things like touching her gums or, in the case of cats, extending her paws (which will be very helpful at the vet and groomer later).

Make sure you do these activities at the office or any other place your animal may spend a lot of time so she’s accustomed to the various sights and sounds there, as well.

When introducing your pet to strangers (which you should only do once she trusts you), don’t force it. Let your guests know the “rules” of socialization, like talking softly and ending affection after aggressive behavior. Be very careful not to allow small children to handle them roughly. When it comes to cats, let the kitty go to them. It’s OK to let people approach your dog if she’s comfortable with it, but end the play session if they don’t seem comfortable. If they seem quieter or louder than normal or put their heads down, they’re probably scared.

To socialize your kitten or puppy with other animals, first, introduce them to the other animal’s scent. Give them a blanket or other item the animal has slept on or played with.

The first time they’re in the same room keep two cats separate by playing with each individually while the other watches so they’ll learn to trust the other animal through their trust of you. Do the same with feeding — they should never be expected to eat from the same dish (until they’re buddies, at least).

When they first start playing together, cats may hiss and huff at first. It’s normal. There’s no need to separate them unless you get the telltale cues they’re about to engage.

Dogs will sniff each other (and cats) to get more information about the other animal. But don’t assume that a wagging tail means they’re happy. Pay attention to other behaviors and trust your instincts. If necessary, start by introducing them to the new animal from two separate rooms.

Be especially careful with dogs. Large dogs are actually in a bit of danger here when it comes to meeting cats. The cat’s likely a bit faster and the dog isn’t used to aggressive batting being part of the dance. A good whack to the face could leave a serious mark (and could damage eyes). Watch the cat around certain small breeds, like terriers; they may see a small kitten as prey.

A special note on children

Be very careful socializing your pet with kids. You may think it’s a good idea to take your pet to a park and let all the kids pet her, but that’s not necessarily true. Even if it appears they’re fine because they’re not complaining or biting, they may be secretly thinking, “help me, mommy; I’m just a little tyke and these kids are going to hurt me!” Make sure kids follow the rules, too, and try to keep it to one or two kids at a time.

Celebrity animal trainer face-off: Victoria Stilwell vs. Cesar Milan
How to stop your puppy from chewing and more
Lessons from the animal kindom: How to be the leader of the pack