Oops… even celebrities get it wrong sometimes! We’re telling you why January Jones and Julianne Moore’s SAG Awards fashions fell short in our weekly feature. Learn from the stars’ sartorial slip ups! 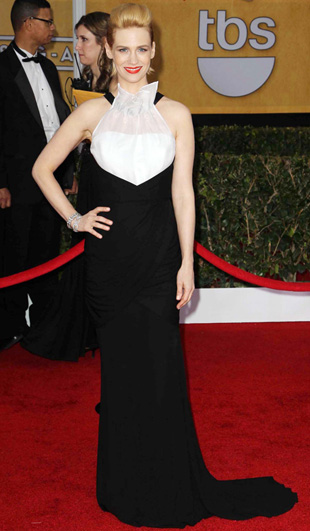 January Jones is never afraid to take a fashion risk, but they don’t always pay off. Case in point: this Prabal Gurung gown she chose for the Screen Actors’ Guild Awards in Hollywood on Sunday. This dress is from the pre-fall 2013 runway collection. January actually added a longer skirt to the original cocktail length version, but there’s just no saving this look.

Black and white can be such a glam combo when done right, but the top, collared white accent on this ebony gown is reminiscent of a bib. Is she taking style inspiration from her infant son Xander these days? Adding a longer train to the original scalloped hemline is odd as well, and looks haphazard.

Not only is this dress not her best look, but who did the Mad Men starlet’s hair and makeup? Poor January must still be in retro character with her pompadour hairdo and bright orange lips.

The final verdict? We know you can do so much better, January! You were stunning in red Versace a few Golden Globes ago with a more natural coif and matching red lip. Try sticking to a colorful dress and a more traditional hairstyle for a look we love. 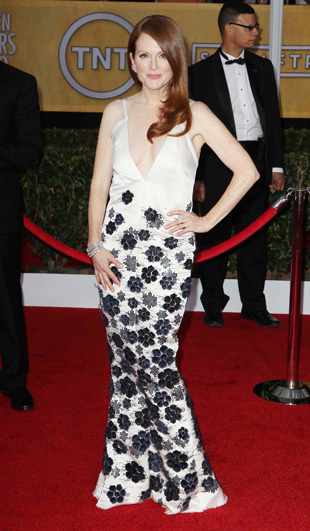 What’s black and white and flowered all over? Julianne Moore at the SAG Awards in a Chanel Haute Couture dress. Perhaps she borrowed Sienna Miller’s stylist, who sported a similarly flower powered gown at the Golden Globes.

The flower applique thing is not working for us. Remember Bedazzlers in the ’80s, where you’d add jewels to your clothes, and patches, which you’d iron onto your denim jacket? It wasn’t a good look then and it’s not a good look more than 20 years later, either. Couture should not look DIY, ladies.

We loved Julianne’s contrasting black and white look at the 2013 Golden Globes, so we know she’s got it in her to make best dressed next time.

The final verdict? While the white dress combined with Julianne’s pale complexion washes her out, we do think her red hair looks lovely. Her mega bling accessories are nice, but let’s hope she also added some double stick tape under the super low-cut gown.