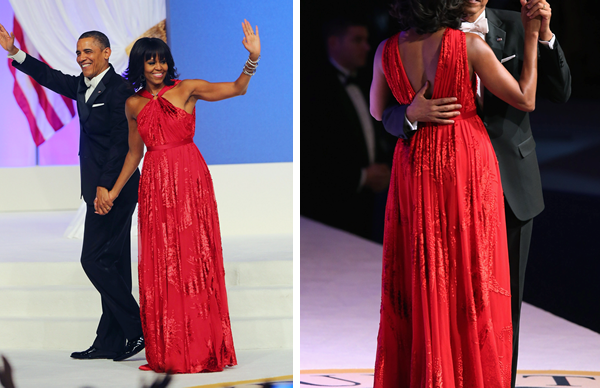 “I can’t believe it. It’s crazy,” Wu told CBS News Monday night. “To have done it once was already the experience of my life. To have a second time is tremendous.”

The ruby red halter gown was adorned with real diamonds — a collaboration with jeweler Kimberly McDonald.

“For this occasion, it had to be real diamonds,” Wu said.

Not that her husband, President Barack Obama, cares that much. He told the crowd that his wife “makes me a better man and a better president.”

All together now: Awww!

We knew M.O. would knock it out of the park during the Ball, especially since she looked so fab during President Obama’s swearing-in ceremony on Monday morning. The 49-year-old opted for a Thom Browne coat, J.Crew dress and belt.

Want to get some of it for yourself?

Well, you can’t: The Browne coat was custom made, and the J.Crew belt has already sold out.

What do you think about Michelle Obama’s red Jason Wu gown?