Everyone might be focused on what First Lady Michelle Obama wore to the inauguration, but her daughters — Sasha and Malia Obama — were pretty fashion-forward, too. 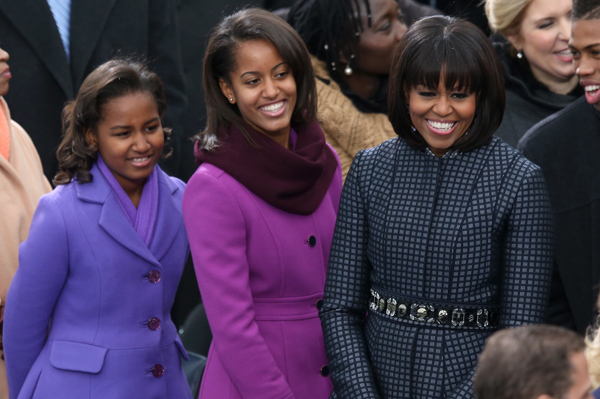 First Lady Michelle Obama mixed high and low pieces for the 2013 Inauguration, but daughters Sasha Obama and Malia Obama kept to their teenage form and opted for youth-friendly designers.

Malia, 14, looked strikingly like her mother in her magenta J. Crew coat — complete with custom buttons — along with violet tights. Eleven-year-old Sasha, on the other hand, opted for a purple Kate Spade coat with gray tights and a striped Kate Spade dress. So cute!

The FLOTUS, on the other hand, opted for a Thom Browne coat and dress, along with a Reed Krakoff cardigan and boots.

It’s hard to believe these are the same two girls that we first met four years ago. Both are maturing into beautiful — and playful — young ladies, especially Sasha. The sassy youngster congratulated her dad after he took the official oath on Sunday.

Now, onto the official Inaugural Ball, slated for tonight. We can’t wait to see what the First Lady and First Daughters will wear, but President Obama is more worried about getting some quality time in with his wife.

“Now that’s a tough choice, and I think I’ll have to consult with my wife. Last time out, Beyonce sang ‘At Last,’ Etta James’ classic, and that was a pretty good choice. Whatever it is it’s got to be a slow song so that I can put my moves on Michelle,” the President told Ryan Seacrest of the first song at the ball. “Something a little romantic, you know? I haven’t seen her a lot lately. I’ve been on the road too much.”

What the stars’ Golden Globes fashions really reveal about their lives
Get the look: Sundance chic
Best (and worst) dressed at the Critics’ Choice Awards