Oops… even celebrities get it wrong sometimes! We’re telling you why Halle Berry and Sienna Miller’s fashions fell short at the Golden Globes in our weekly feature. Learn from the stars’ sartorial slip ups! 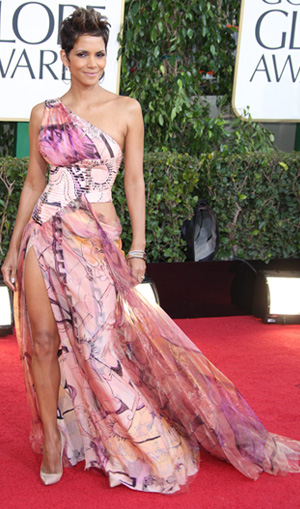 Just because you’re a beautiful woman doesn’t mean you can get away with wearing an awful dress to the Golden Globes… here’s looking at you, Halle Berry! The Oscar-winning actress chose this Atelier Versace gown for the Globes, but she’s not taking home any fashion awards in this number.

This dress looks like it’s straight out of Wet Seal and made for a girl going to a high school homecoming dance, not one of Hollywood’s biggest award shows. The busy print with chain links on it screams cheap and tacky to us, and the Angelina Jolie-esque super high leg slit isn’t making it look any classier.

The final verdict? Halle is a gorgeous woman and has an amazing body, but this dress is all wrong for a 46-year-old woman attending the Golden Globes. We do like her simple hairstyle and fresh-faced glow, though… from the head up, she looks fab! 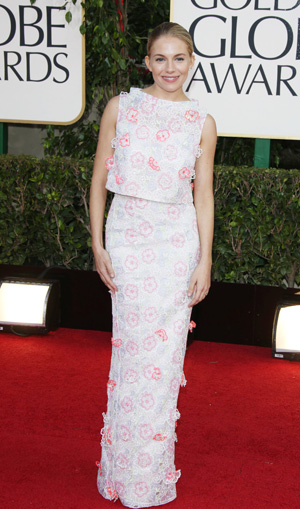 Sienna Miller is stuck in the ’60s in this flower powered ensemble. Her pastel colored custom skirt and top getup for the Golden Globes was made by Erdem, and we vote to leave this look in another decade, where it belongs.

The new mom looks amazing for having just given birth last year, but this outfit is awful on her. The appliqued flowers hanging off remind us of a doily, and the wide cut of the top isn’t flattering. Instead of streamlining her enviable figure, this creation cuts her in half.

The final verdict? The British actress, who formerly had her own fashion line with her sister, should really know better. She didn’t take home the Golden Globe she was nominated for that night and she’s not winning best dressed from us, either. Better luck next year, babe!